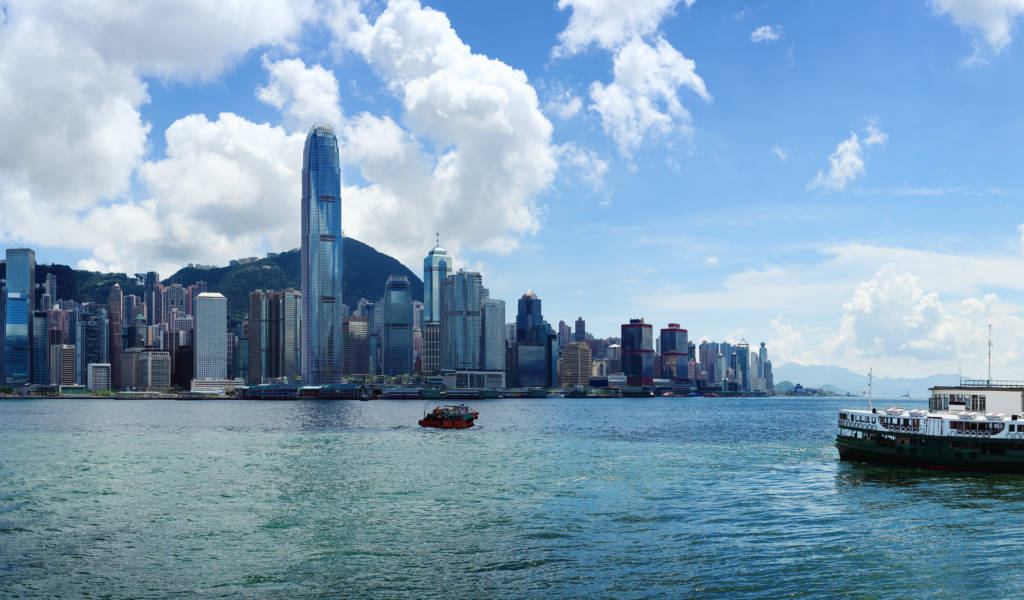 Victoria Harbour, whose deep waters separate Hong Kong Island from Kowloon, boasts one of the most beautiful skylines in the world. Regardless of which side you are on, the view never fails to impress, with towering green mountains, sparkling skyscrapers, and a constant flow of ships, giving the harbour a great energy.

Over in Tsim Sha Tsui (TST), the best place to take in the harbour view is from the observation deck next to the Star Ferry Terminal. This waterfront promenade is a lovely open space, where you can stroll around admiring the uninterrupted view. This is especially popular in the evenings, when the lights of the city start to shine. The promenade also leads you to the nearby Avenue of Stars, a boulevard dedicated to Hong Kong’s film stars.

On Hong Kong Island side, you can admire the view from Central by walking along the Central Harbourfront, which stretches from the Star Ferry Pier and heads east towards Wan Chai, which is a lot less crowded.

Every night at 8pm, people gather along Victoria Harbour to watch the Symphony of Lights, the world’s largest permanent light show. Important landmarks of the city light up during the 14-minute show, accompanied by orchestral music. The observation deck in TST is again a prime spot to watch the show.

Crossing Victoria Harbour on the iconic Star Ferry is truly a quintessential Hong Kong experience, not only because it is historic, but also because you get to enjoy the view of both sides during the peaceful ride.

The harbour is a popular spot for sightseeing cruises, the best being the Aqualuna, an authentic refurbished junk boat, complete with regal red sails. Cruises run throughout the day, but watching the Symphony of Lights aboard the Aqualuna is a fantastic experience.

The Central Ferry Piers, as well as the Macau Ferry Terminal, are both on the Central side of Victoria Harbour, providing lots of day trip opportunities to one of Hong Kong’s many outlying islands, such as Lantau, Cheung Chau or Lamma.

The ferry piers are actually a great place to enjoy the harbour view. On top of Pier 3 there’s an open-air bar with sea views, and at Pier 7, which is the Star Ferry Pier, there is a public viewing deck. Next door is the Hong Kong Maritime Museum, which exhibits Hong Kong’s maritime history.

Next to the ferry piers is the Hong Kong Observation Wheel, which gives you a view of the harbour from 60 metres up. However, there are countless rooftop bars way more more than twice that high, such as Ozone, located on the whopping 118th floor of the Ritz Carlton in Kowloon.

But of course, it goes without saying that one of the most incredible views of Victoria Harbour is seen from Victoria Peak, the highest point on Hong Kong Island. If your hotel is in Kowloon, you can combine three important experiences in one day. First take the Star Ferry across the harbour, jump on Bus 15C at Central Pier 5 which takes you to the Peak Tram Lower Terminus in Central, and then ride the Peak Tram to the top of the mountain to see Hong Kong in all of its glory.