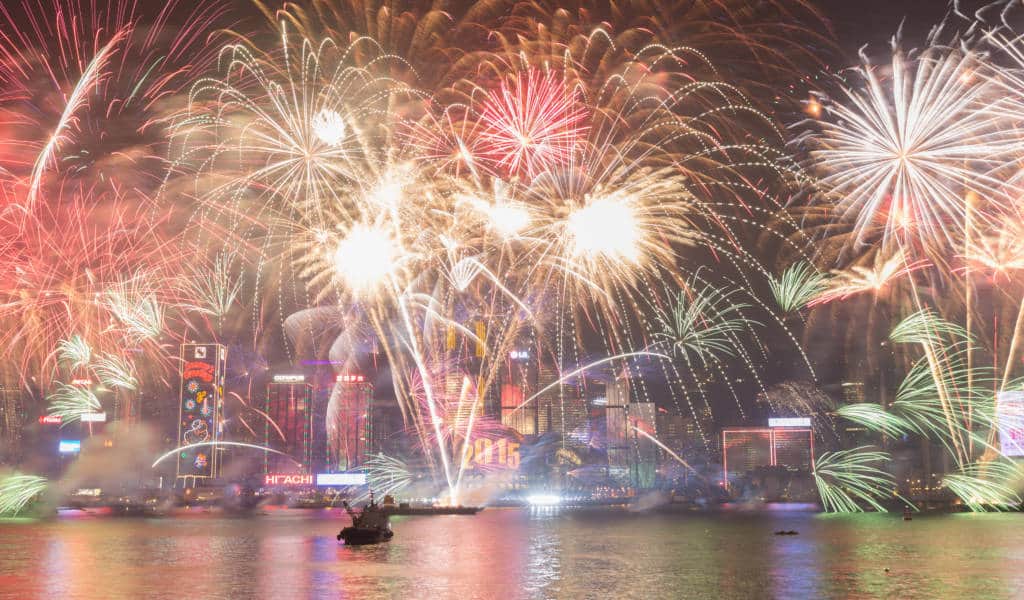 Pic: iStock.com/winhorse
Sharing
We are yet to confirm the dates and details of this event.
Important: The Chinese New Year Fireworks for 2023 have not yet been confirmed, but if they do go ahead they will most likely happen on January 23.

The annual Chinese New Year Fireworks (last held in 2019 due to COVID etc.) are a huge event, with thousands of people lining Victoria Harbour to watch the incredible spectacle.

In order to let both sides of the harbourfront get a good view, a fleet of barges park in the middle of Victoria Harbour, between Tsim Sha Tsui and Central, to release the fireworks. All harbour traffic comes to a halt during this time. The city’s most prominent towers on both sides of the harbour also take part in this amazing synchronised event.

Because the fireworks are so popular, you’ll want to get there early and get a good spot. The fireworks start at 8pm, and there is no admission fee to any of the public viewing areas.

Traffic is very intense during this time, so it is strongly recommended to take the MTR and other modes of public transportation to get to Victoria Harbour, and to avoid trying to cross the harbour at this time.

If you want to ring in the lunar new year with a big bang, here are some of the best vantage points to watch the incredible fireworks. Note that these will also, of course, be the most crowded!

Many restaurants and bars in Hong Kong’s multitude of skyscrapers also sell tickets to private events where you can watch the fireworks. The tickets won’t come cheap, but typically do feature an elaborate meal and fancy drinks like champagne. You will need to make a reservation in advance as tickets sell out quickly.

If you can afford to splurge, some restaurants in Tsim Sha Tsui that are especially famous for their Chinese New Year dinner-plus-fireworks are Hutong, Aqua, Felix, and the Intercontinental Hotel.

Another popular option is a harbour boat cruise to watch the show from the water. Websites like Viator list a number of boat cruises, and more are typically added closer to the date.

If you truly can’t handle the crowds, then head up to Victoria Peak for an amazing view from the top of Hong Kong Island. While you can get a great view from the Peak Tower, you can also get the view for free from nearby viewing points, such as the Lion’s Pavilion, and the Lugard Road Lookout.