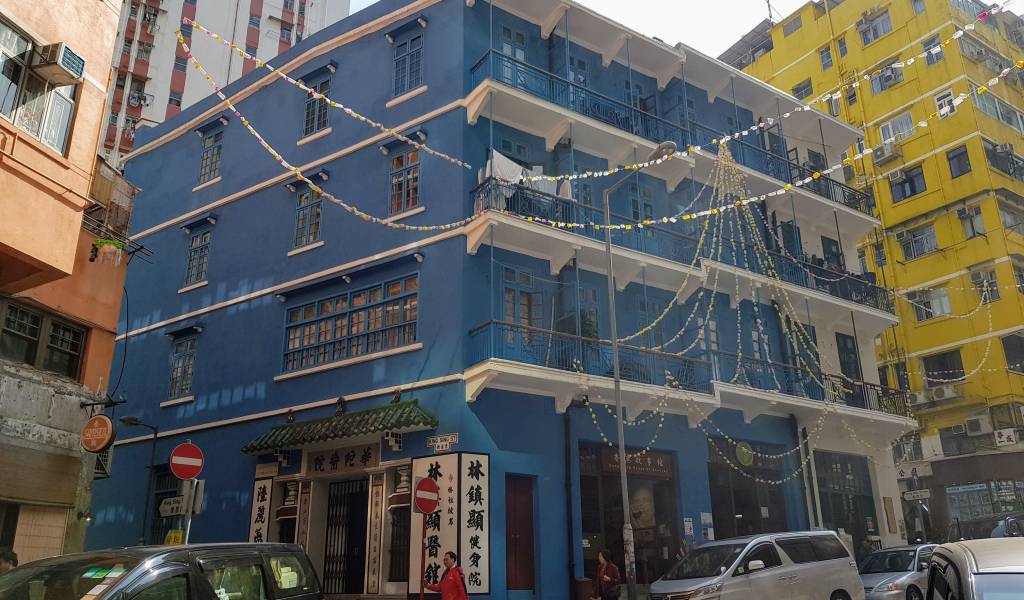 In a fast-paced city where ‘out with the old, in with the new’ is a way of life, The Blue House in Wan Chai has, thankfully, managed to survive Hong Kong’s propensity for highrises.

The small but eye-catching cluster of buildings, collectively called ‘The Blue House’, stands just off busy Queen’s Road East, on Stone Nullah Lane. The cluster consists of the Blue House, Yellow House and Orange House, but the Blue House is the most distinctive and well known.

So what’s so special about these little colourful buildings? Despite their demure size, they have a rich and fascinating history, and have been recognised as part of Hong Kong’s living culture.

The four-storey Blue House dates back to the 1920s, with distinctive Lingnan-style architecture, incorporating both Chinese and Western features. It was once the site of a hospital, a temple, a tenement and later a martial arts training centre. The building still bares the original sign of the temple and hospital that once inhabited it.

The ground floor of the Blue House is now home to the Hong Kong House of Stories, with a small community-run museum. They hold cultural events, exhibitions, workshops, and walking tours around Wan Chai. They are dedicated to preserving and promoting the local culture of the area to locals and tourists alike, so don’t just walk by and take a picture—feel free to go in and have a chat with them while you’re there.

The Yellow House, next door, is a traditional tong lau shophouse, whereby shops were at street level and tenants lived on the upper floors. At one time, the building faced demolition, but it was saved and given a facelift, in a good (and rare) example of urban conservation.

The Orange House is the most modern of the three houses, as it is a four-storey classic tenement building, constructed in the 1950s. Once the site of a timber yard, today it is a residential building.

One interesting anecdote about the Blue House is about its colour. According to the story, back in the 1920s when the building was being repainted, blue paint was the only colour the workmen could find that day. Little could they imagine that a century later, the colour would be one of its most well-known features, and perhaps one of the things that saved it from demolition.

In recent years, many small buildings close to the Blue House have also been painted in bright colours, bringing a new energy into the area, and adding a splash of colour in Wan Chai.