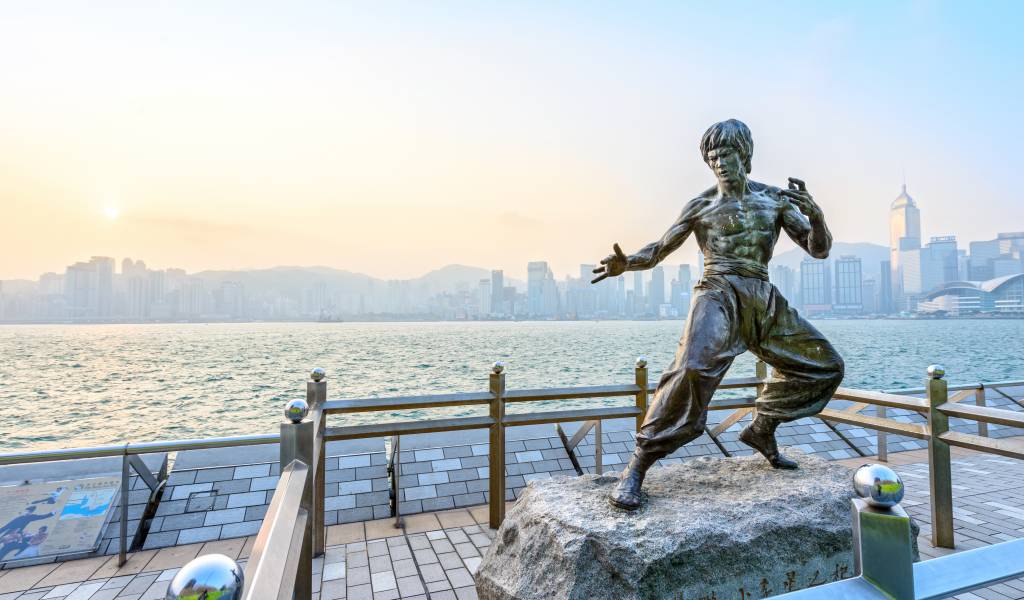 Hong Kong’s own ‘walk of fame’, the Avenue of Stars is a popular scenic spot along the waterfront of Tsim Sha Tsui, which honours important figures in Hong Kong’s film industry.

Long considered the ‘Hollywood of the Far East’, Hong Kong has been an important centre for film for more than a century, producing iconic movies, as well as actors and actresses who rose to worldwide fame.

If you’re a hardcore film buff, you may recognise a lot of the names of not only film stars, but also directors and producers. But if you’re not, you’ll surely still know some who made it big across the globe.

There are a number of statues, the most popular being that of Bruce Lee, with not only fists of fury but super ripped abs (people love to come here to try and recreate the pose—but make sure you keep your shirt on, please).

Another favorite set of statues are the life-sized ones of a director and a cameraman on set, and the trio of a boom operator, a camera, and a lighting crew. They make some pretty cool shots with the incredible skyline of Hong Kong Island in the background.

All along the Avenue of Stars are the handprints of celebrities such as Jackie Chan, Jet Li, Chow Yun Fat, John Woo, and Michelle Yeoh (of Crouching Tiger, Hidden Dragon fame). And that’s naming just a few; for there are more than 100 in total.

The Avenue of Stars, which was recently revitalized, is part of the Tsim Sha Tsui Promenade, so be sure to read our guide about enjoying this waterfront area and what else to see and do here.

If you truly love Hong Kong movies, then there’s a little known gem you should visit. The Hong Kong Film Archives is dedicated to preserving and promoting Hong Kong’s rich film heritage. The HKFA has a small cinema which shows classic Hong Kong films, with English subtitles, throughout the year. So be sure to check their schedule to see what’s on while you’re in town.