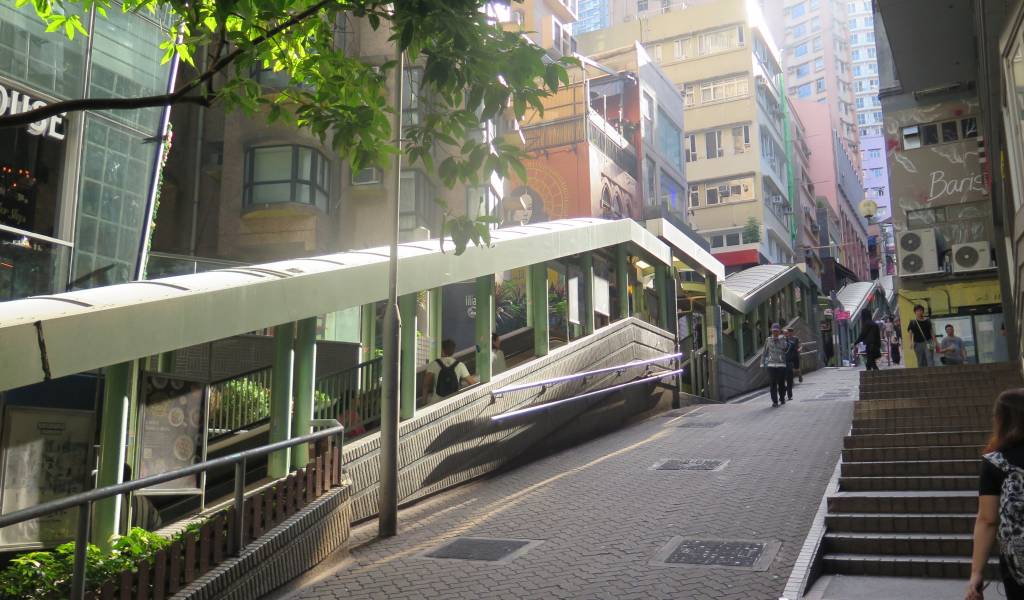 Hong Kong is a city that walks—a lot. With few people owning cars, public transport is amazing, and, at times, inventive. In 1993, to ease congestion, the government opened the Central–Mid-Levels escalator, a long covered moving walkway to connect the steep, hilly Mid-Levels area with the Central business district below.

A one-way ride on the escalator takes about 20 minutes. In that time you’ll go a length of 800 metres at a vertical climb of 135 metres.

Cleverly, the escalator goes downhill from the Mid-Levels from 6 am, to allow people to walk down to work, and then actually switches directions to go uphill at 10 am, until midnight. It’s been described as one of the coolest commutes in the world, with more than 80,000 people using it every day.

Whether going up or down, the escalator is not only useful but fun, as you get to stroll above the city on a series of elevated footbridges and escalators, which run from the heart of Central, over bustling street markets and hawker stalls, past the historic Central Police Station, and by a number of trendy bars, restaurants and cafes, giving you lots of photo opportunities.

Once on the escalator, you can simply stand on the righthand side and watch the world go by, or do like the locals and walk up the escalator on the left, if you’re in a hurry. There is a stairway next to it to let you go in the opposite direction, but it sure is a whole lot of steps.

At certain points the escalator has exits to let you ‘get off’ at street level, and there are large pink maps and signs, in Chinese and English, to help you figure out where to go. It’s a handy way to get to Hollywood Road, where you can poke about the antique shops on Cat Street, and visit the historic Man Mo Temple.

If you’re into the arts, another place to visit along the Escalator is PMQ, a new hub for art and design. Located on Staunton Street, PMQ, which stands for ‘Police Married Quarters’, was once part of the historic Hollywood Road Police Station, and today has a number of studios, events and exhibitions, giving you a look at the next generation of Hong Kong artists.

Most people riding the Central–Mid-Levels escalator up in the evening have finished work and are headed out for a drink, and the hilly roads are lined with pubs and bars, many of which have outdoor seating. This makes it a great place to sit and do some awesome people watching.

The busiest areas are around SoHo—south of Hollywood Road—particularly Staunton Street and Elgin Street, with a wide choice of bars ranging from tiny hole-in-the-wall taco joints to classy French restaurants. SoHo is definitely more upscale, and gets busy on a Friday night, but is a good alternative to the more raucous action in Lan Kwai Fong.

Note that the escalator is not accessible for wheelchairs or strollers. The escalator is narrow and steep, frequently ends abruptly at a set of stairs, goes in only one direction and the only way to go in the other direction is to walk down steps.