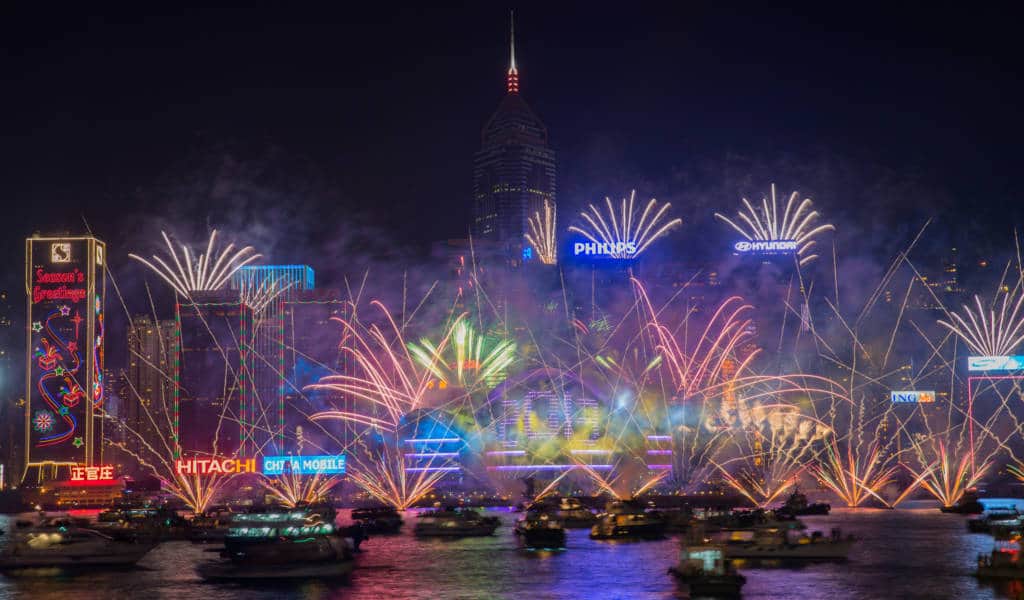 One of Hong Kong’s three biggest fireworks displays—the others being New Year’s Eve in the Western calendar and Chinese New Year in the lunar calendar—the National Day celebrations are a huge event, taking place over Victoria Harbour.

National Day is held every year on October 1, marking the formation of the People’s Republic of China, back in 1949. This holiday has been celebrated in Hong Kong since the 1997 handover of Hong Kong from British rule, and also in neighbouring territory Macau.

But first, a word of warning: if you’re planning to visit Hong Kong during China’s infamously busy ‘Golden Week’ of holidays leading up to National Day, we hope you’ve booked your hotel way, way in advance!

If you’re staying in Wan Chai and are an early riser, head out to see the pomp and circumstance of the National Day Flag Raising Ceremony, at 8 am, at Golden Bauhinia Square outside the Hong Kong Convention and Exhibition Centre.

National Day horse races are also a big event at the Sha Tin Racecourse, with lots of entertainment and cultural performances at the racetrack.

But the star of the show is the evening fireworks display at Victoria Harbour. You can expect huge crowds and lots of pushing, but it’s worth it to see the stunning pyrotechnics.

If you don’t mind being a bit further away from the action, you can also watch the fireworks from above at Victoria Peak.

Organisers may cancel events, alter schedules, or change admission requirements without notice. Always check official sites before heading to an event.
1st Oct, 2023
8:00am
Victoria Harbour, Tsim Sha Tsui Promenade
Festival
Central
Typical weather at this time:
High: 29 ºC Low: 26 ºC
We do our best to make sure event info is correct. However, all event details are subject to change.