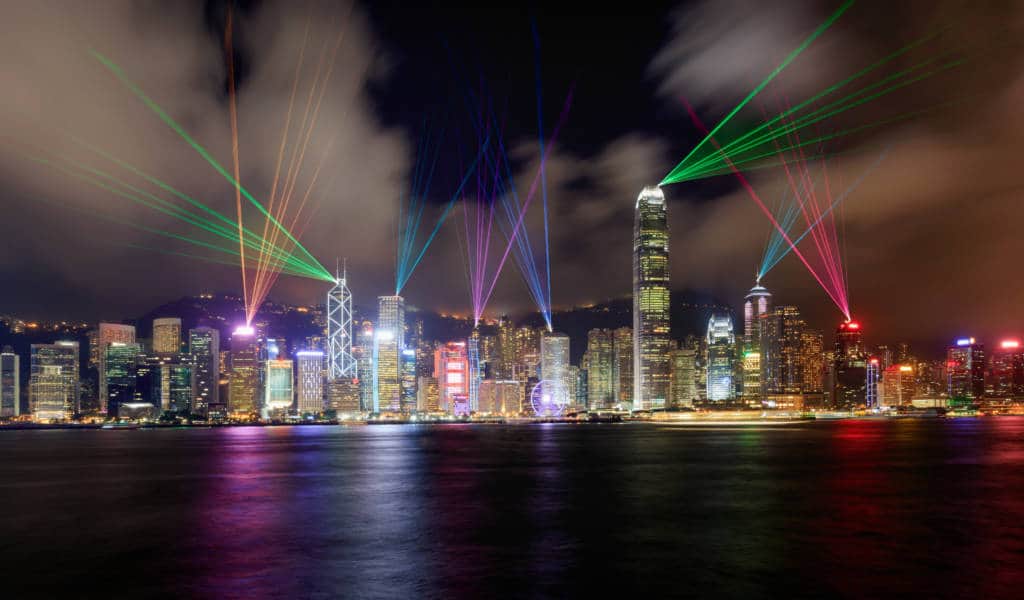 A Symphony of Lights

Every night at 8pm, at Victoria Harbour, the lights of the city start to sparkle and dance in a choreographed spectacle called ‘A Symphony of Lights’.

A Symphony of Lights is an incredible multi-media show that has been performed nightly since 2004, illuminating Hong Kong’s iconic skyline. The show lasts for about 10 minutes, and is free for the public to enjoy.

During the show, the city’s most important (and tallest) buildings are lit up, with searchlights, lasers, LED screens and lighting, both on Hong Kong Island and in Kowloon.

Though you can watch the light show from either side of the harbour, the absolute best place to see the show is from the Tsim Sha Tsui Promenade, located next to the Star Ferry Terminal. Climb the steps to the upper deck of the observation platform a bit before 8pm to get a good seat (or at least a good place to stand). The promenade stretches all the way along the waterfront, so you can walk a bit further down to get away from the crowds.

On the Tsim Sha Tsui Promenade, speakers announce the buildings featured in the show, accompanied by a musical score played by the Hong Kong Philharmonic Orchestra. The soundtrack has traditional Chinese flutes and string instruments such as the Erhu, giving the light show a lovely ambience.

A total of 41 buildings and two attractions are featured in the Symphony of Lights, showing tourists the city’s iconic skyscrapers and landmarks. These include the International Finance Centre, the Hong Kong Observation Wheel, the famous triangular-designed Bank of China Tower, and HSBC and Standard Chartered Bank, which make Hong Kong Island’s skyline so distinctive.

If you’re on the Tsim Sha Tsui Promenade, look behind you and you’ll also see the Hong Kong Cultural Centre lit up, as well as the nearby International Commerce Centre, the tallest tower in all of Hong Kong.

Other than the Tsim Sha Tsui Promenade, there are a number of places to take in the show:

To splash out a little, book the Symphony of Lights Tour on the Aqua Luna, the distinctive red-sailed wooden junk boat that gives tours of Victoria Harbour.

On a cheapo budget? No problem! Simply hop a ride on the Star Ferry just before 8pm to see the show taking place on both sides of the harbour.