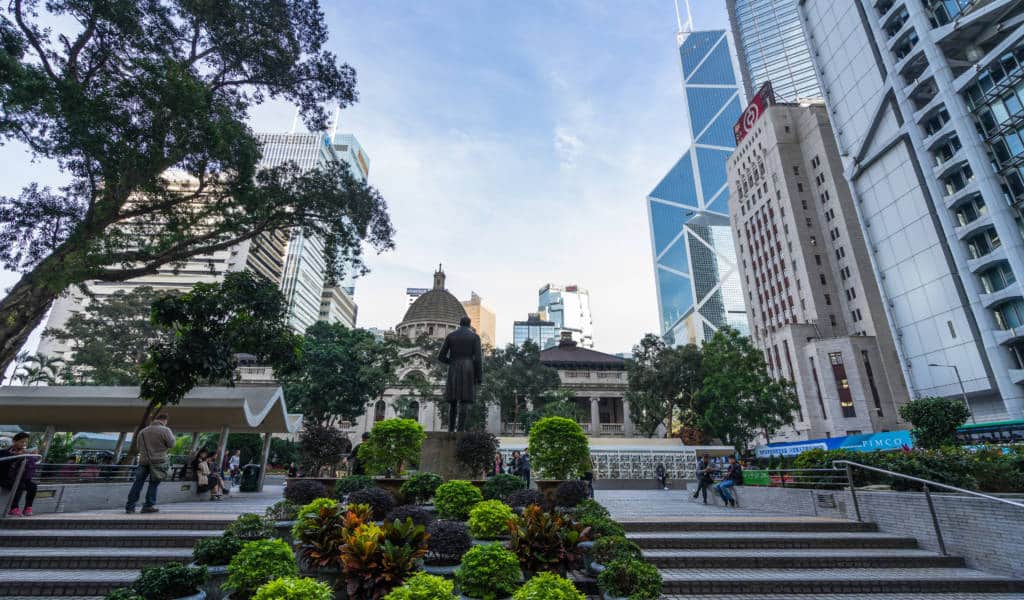 Standing in the very heart of Central’s financial district is Statue Square. This small but lovely open pedestrian space features large fountains, sitting out spaces, and, of course, a statue, looking out proudly over the hustle and bustle of the city.

Statue Square is flanked by a number of landmark buildings: the historic Old Supreme Court, which dates back to 1912; the distinctive HSBC Headquarters, and Prince’s Building, a luxury retail and office block.

Statue Square is easily accessed by foot and public transportation. There’s an entrance to the Central MTR Station (Exit K) directly in the square, a stop on the Hong Kong Tramways in front of it, and lots of buses. You can also walk from the Star Ferry to Statue Square via an underground walkway.

The Square is a popular spot for events, such as art exhibits and large-scale installations.

It is also particularly crowded on Sundays, when Filipino domestic workers enjoy their weekly day-off and make themselves comfortable in the square.

And what of the statue that gives Statue Square its name? The sole figure that stands in the square is of Sir Thomas Jackson, one of the early HSBC Bank managers.

But once upon a time many statues were proudly displayed, including those of Queen Victoria, Queen Alexandra, King George V, and many other royals.

Almost all of them — except for Sir Jackson and that of Queen Victoria, which was shipped out of Hong Kong at the onset of war and now stands in Victoria Park in Causeway Bay — fell into Japanese hands during WWII and was melted down, making Sir Jackson the sole survivor.

If you have an interest in this history, then be sure to also visit The Cenotaph, next to Statue Square, a war memorial and an important monument that has stood the test of time.