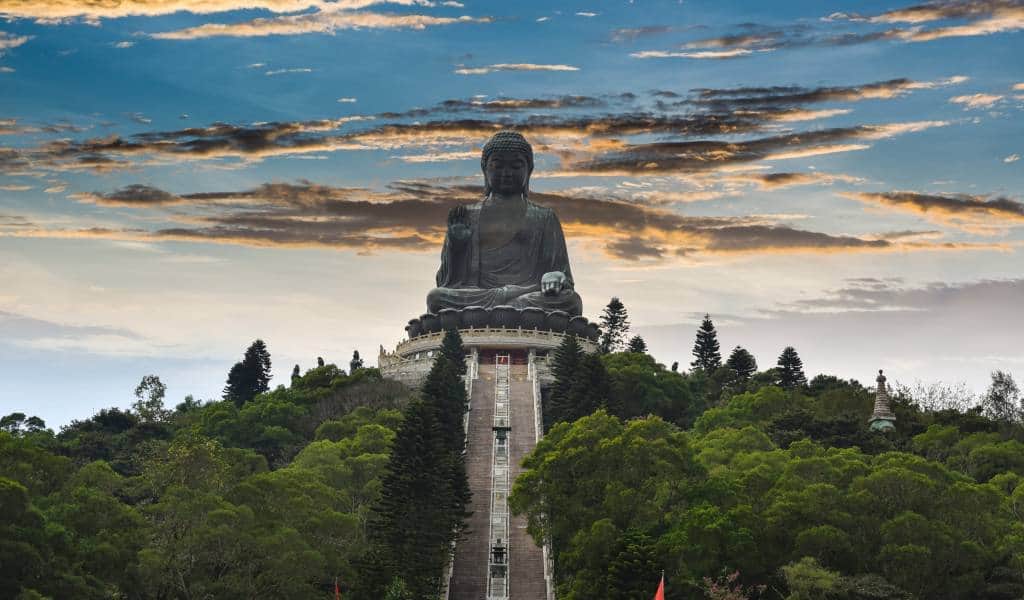 Lantau Island is often called the ‘green lungs of Hong Kong’, and for good reason. Though twice the size of Hong Kong island, it is 50% national park and remains largely undeveloped, except for the new town of Tung Chung, next to the airport. Yet Lantau has a number of must-see attractions, and you can easily spend an entire day—or better yet, add on a night—in this beautiful, lush area.

What to see and do on Lantau

Hong Kong Disneyland is located on the northern part of Lantau, with easy access by MTR. The most popular theme park in Hong Kong is full of all the rides, shows and attractions that we know and love, plus a few that are unique to Hong Kong.

Nearby is Tung Chung, the biggest town on Lantau, and the gateway to the Big Buddha. Tung Chung is where you catch a ride on the scenic Ngong Ping 360 Cable Car, which whisks you up into the mountains.

To see more of the island, many people take the cable car up to the Big Buddha, and then a bus down to another area of Lantau. A popular choice is the Tai O Fishing Village, a remote town that feels trapped in time. This is one of the few places in Hong Kong that still has traditional stilt houses, plus lively markets, seafood drying in the sun, and tiny noodle shops. From Tai O you can take a boat tour to see Hong Kong’s endangered pink dolphins.

Mui Wo is another interesting village, for a unique reason. This is one of the last places in Hong Kong where wild cattle and buffalo roam the roads. Rent a bike at the ferry pier and ride through old fashioned villages to reach Silvermine Waterfall and Silvermine Cave, Man Mo Temple, and Silvermine Beach. You can get to Mui Wo either by ferry from Pier 6 in Central, or New Lantau Bus 3M from Tung Chung, or bus 1 from Tai O.

Further down the island, and accessible only by a hair-raising bus or taxi ride over the mountain, is Cheung Sha Beach, a long, sandy bay with a handful of waterfront restaurants and bars. This is a peaceful place with almost no visitors on a weekday, and a great escape from the concrete jungle.

Discovery Bay is a residential area with a lovely waterfront area, featuring al fresco restaurants with a view of Tai Pak Beach. DB can only be reached by ferry from Central or bus from Tung Chung. Many of the restaurants give you a free ferry ticket for eating there. If you’ve got kids, you can take them to Epicland, a massive indoor playroom, which comes in handy on a rainy day.

Hiking is very popular on Lantau, with more than 70 kilometres of trails connecting the island. Some of the more popular routes are Discovery Bay to Mui Wo, Mui Wo to Tung Chung via the Olympic Trail, and summiting Lantau Peak and Sunset Peak, the second and third highest mountains in Hong Kong.

What to eat and drink on Lantau

Disneyland has a long, long list of restaurants to choose from, but Main Street Corner Cafe is popular for international cuisine. If you want some Chinese food or dim sum, try the buffet at Dragon Wind, or the dim sum at Crystal Lotus.

Tung Chung has eateries both in and around the mall and the MTR station, including Nha Trang for Vietnamese, Watami and Genki Sushi for Japanese, and various cafes. If you have time, Zentro, on the far side of the mall, is an outdoor bar in a garden setting, and a nice place to have a pint while watching the planes taking off.

Up at the Big Buddha, try the vegetarian cuisine at Po Lin Monastery, though there are a number of other places to choose from. Inside Ngong Ping Village there’s Ebeneezer’s Kebabs, AOK Hong Kong Cafe serving authentic local treats, and the classic Chinese-style Li-Nong Tea House.

Due to its remoteness, Tai O has little outside influence, so simply stroll around this quaint village and try out the local dining, such as Tai O Crossing Boat Restaurant. Many may not have English menus but everyone knows what ‘wonton soup’ is, if you don’t know what to order. The Tai O Lookout is located inside the classic Tai O Heritage Hotel, which was once a police station during the time of British rule.

Mui Wo has a number of great restaurants, but China Bear is the most popular pub and a stone’s throw from the ferry back to Central. For pizza and pasta head to The Kitchen, and if you like Turkish then get authentic at Bache. Next to the ferry pier is the local Cooked Food Market, where the Wah Kee restaurant has famous crispy spiced squid.

Lower Cheung Sha beach has restaurants right on the sand—Bathers serves up British cuisine while Long Island has both Eastern and Western dishes.

Many restaurants will help you call an elusive Blue Taxi, which operates only on Lantau, to take you back when you’re done.

Where to stay on Lantau

Lantau is a big island with lots to see, so tourists could sightsee during the day and then spend the night at one of Lantau’s hotels, especially if you have an early flight departing the next morning.

If you’re planning to stay at Disneyland for a night, you’re in luck because this theme park has not one but three hotels, all of which are a kid’s paradise and have outdoor pools.

Discovery Bay is also a good place to stay if you have kids, and it is easy enough to take the 30-minute ferry to Central. DB has one hotel, the Auberge, with a kids club, rooms offering mountain or ocean views, and lots of facilities.

Tung Chung also has one hotel, the Novotel Citygate, which is connected to the Citygate Mall. The rooms have excellent ocean and airport views and a shuttle to the airport.

Spend a night in the mountains under the watchful gaze of the Big Buddha by staying at the YHA Ngong Ping SG Davis Youth Hostel, which has clean dorms, single rooms, family rooms, and a cute ‘Glamping Bell Tent’. Just be aware that due to its elevation Ngong Ping is the coldest area of Hong Kong and temperatures can be very low in the winter, and Hong Kong buildings generally do not have heat.

In Mui Wo, the Silvermine Beach Resort is the biggest and oldest, with a prime location right on the beach with an outdoor pool. A bit more down the beach is the Seaview Holiday Resort, where even the large ‘VIP Room’ is half the price of a hotel on Hong Kong Island.

Staying a night in Tai O would be an unforgettable experience. Tai O Inn By The Sea has views of the fishing village from the bedrooms, while the Espace Elastique B&B is a nicely renovated village house with a big patio and balconies. For a really romantic night, stay at the Tai O Heritage Hotel, a beautifully conserved historic building, dating back to 1902.

One of the stranger accommodations available on Lantau are camper vans, though only for sleeping, not driving around. In Pui O Village, you can sleep in the JK Club’s Camping and Caravan Park, close to Pui O Beach. There isn’t much in Pui O itself, but waking up to feral buffalo walking through the gardens will make you question whether you’re really in Hong Kong.

All Articles about Lantau Island