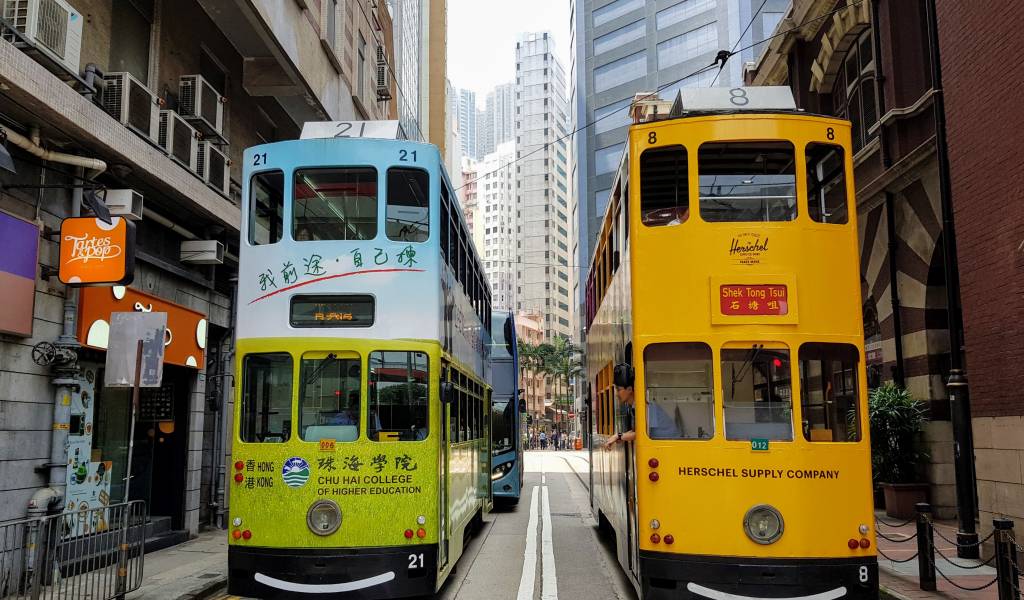 Ding Ding! How to Ride the Hong Kong Tram

It’s not the fastest way to get around Hong Kong, but the Ding Ding is undoubtedly the most scenic.

Hong Kong Tramways—affectionately known as the ‘Ding Ding’ to locals because of its quaint little bell—has plied its way through Hong Kong’s roads for over a century. And at a minuscule HK$2.60, it holds the honour of being the cheapest ride around (the Star Ferry comes in at a close second).

If you have all the time in the world, you could just park yourself on the top deck and ride the entire route, watching the world go by. This however would take one heck of a long time. Most people just use it for quick jaunts over a few city blocks, rather than travelling long distances.

Be warned that the trams do not have air conditioning, and in the heat of summer, you’ll wish they did. The windows do open, and often let in not only fresh air, but also rain. You’ll truly feel like you’ve stepped back in time in this classic mode of transportation.

Regardless of how far your journey is, riding the Ding Ding is a quintessential Hong Kong experience. Here’s our guide on how to ride the tram, and what attractions are close to the tram stops.

The tram runs an east–west route along the north shore of Hong Kong Island, from the western terminus in Kennedy Town to the eastern terminus in Shau Kei Wan. There is one loop which goes specifically to Happy Valley to take people to the Happy Valley Racecourse. Each tram stop has a name, though it can be hard to see the signs and know where to get off.

So, how to get around by tram? The front of every tram shows its destination, so you just need to know if you are going east or west. The ones going to Western Market, are, obviously, heading west through Central, as are the Shek Tong Tsui and Kennedy Town trams. The ones going to Causeway Bay, North Point and Shau Kei Wan are all heading east.

How to board the tram in Hong Kong

Don’t make the mistake of entering the doors at the front, because that’s actually the exit. You jump on all trams through the turnstile at the rear entrance, and pay as you get off at the front. You can either choose to sit on the lower deck or the top deck, and there are stairs at the front and the back, but it’s good etiquette to go up the stairs at the back.

Because of the flat fare of HK$2.60, it doesn’t matter where or when you get off, the price is the same. But be aware the conductors do not give change, so you’ll either need coins or an Octopus card. Senior citizens get half price so watch out for grumpy grannies wielding umbrellas and trolleys of vegetables—they are fierce and fast.

If you love trams and want to use it a lot, we recommend getting a 4-day Tram Pass for a very cheapo price of HK$34.00. This gives you unlimited rides on the tram for four consecutive days. As for where to go, there’s no shortage of things to see along the Ding Ding route. So get comfy and enjoy the ride!

What to see along the tram line

Here’s our recommendations for the top attractions that are along the tram line, from west to east.

Other things to do on the tram