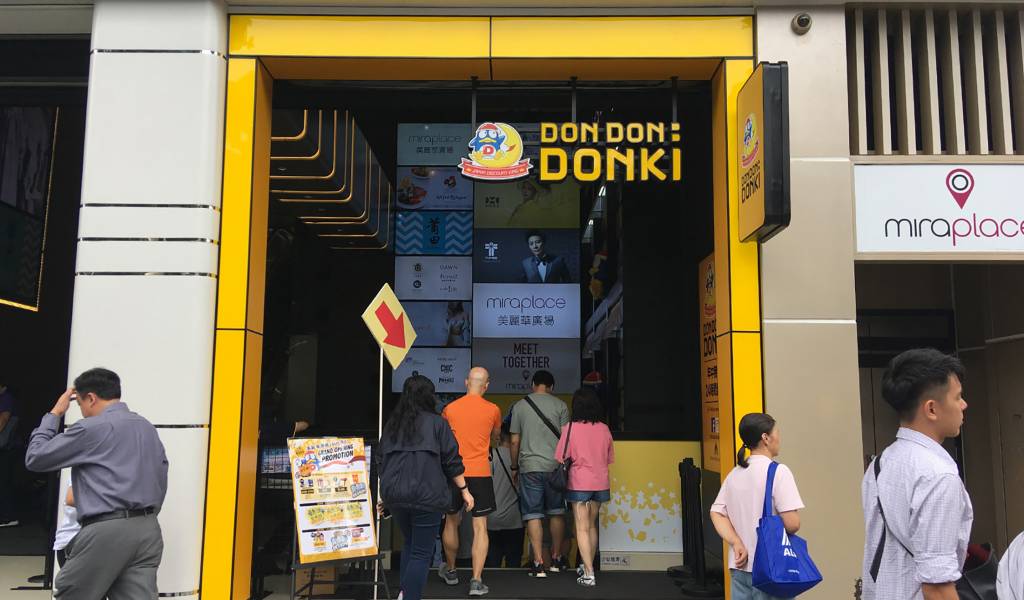 First, for those who aren’t familiar with Don Quijote, it’s the biggest discount chain store in Japan with over 320 stores across the world. Founded in 1978 in Tokyo, the popular Japanese chain has been wooing and wowing customers thanks to its low-priced Japanese homewares, groceries, cosmetics and other delightfully weird goodies.

Similar to its Japanese counterparts, Hong Kong’s Donki has colourful handwritten signs everywhere. It also boasts a wide array of Japanese goods—from fresh fruits to an adult-only corner to a Rimowa luggage counter.

There is a cooked food section in the middle of the shop, offering a range of crowd-pleasing Japanese favourites like fresh nigiri sushi, pork cutlet rice and takoyaki (fried squid balls). You can also find the store’s famous sweet potato fries stall right before the exit.

There’s an loyalty app for the Hong Kong store so customers can save points and money when shopping.

Is shopping here a real bargain?

During our visit, we noticed many of the Japanese products are cheaper here than at other shops around HK.

For example, Ryukakusan herbal drops for sore throat cost HK$29.90 at AEON department store, but only HK$19.80 at Hong Kong Don Don Donki. Likewise, a bottle of Coedo beer is about HK$10.00 cheaper at Donki than elsewhere in Hong Kong.

Some other highlights include special edition Kit Kats, sought-after baby foods and a staggering selection of instant noodles. But it doesn’t mean you can find only cheap items at Don Don Donki.

The second Donki shop will open in Tsuen Wan’s OP Mall. Spanning a whopping 50,000 sq ft, it’ll be about three times bigger than the Tsim Sha Tsui branch when it opens in December later this year.

See our Hong Kong shopping section for some retail recommendations.