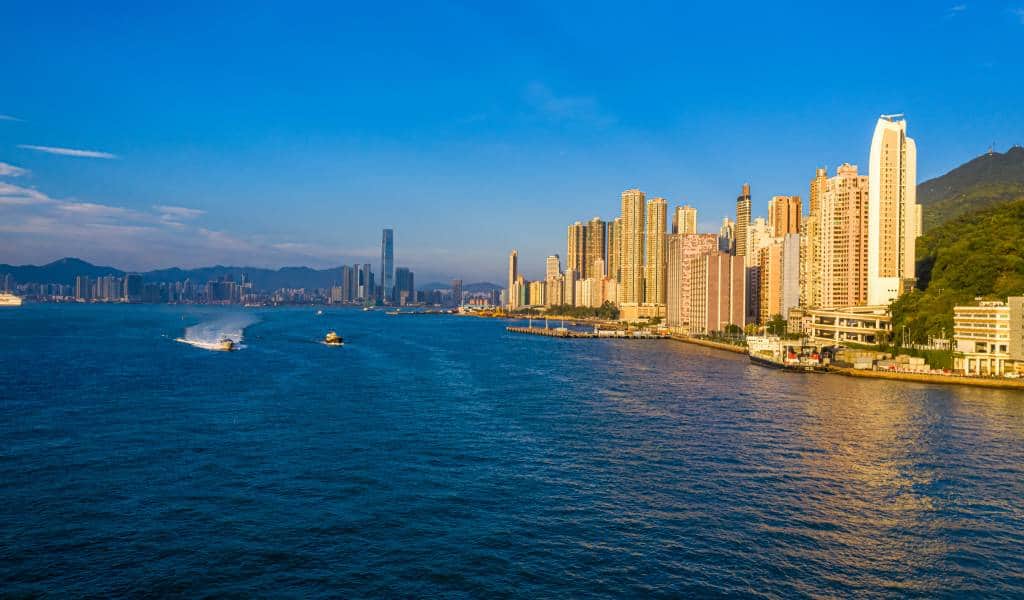 Kennedy Town is somehow cool without knowing that it’s cool. Sitting at the end of the Western District of Hong Kong Island, this largely residential area somehow maintains a slightly more laid-back feel, despite its proximity to Central.

This has changed a bit since the arrival of the new MTR station, but you’re still able to find cute cafes, tiny shops, and bustling local markets, without the pretentiousness of the Mid-Levels or SoHo.

K-Town is small, and the main streets run parallel to Victoria Harbour, which means the ocean is always just around the corner, and the breezes blow through town.

Though it may not be a tourist area, it’s not a bad place to stay as it’s close to downtown, easy to get around, and has a lot of character.

What to see and do in Kennedy Town

It’s always bustling around Catchick Street and Belcher’s Street, with lots of shops to poke around in and explore, and a number of restaurants which open their patios to the street.

The Merton, a huge high-rise at the water’s edge, is a landmark, surrounded by lots of nice places to grab a pint.

Kennedy Town is also a terminus of the Hong Kong Tramways, which terminates outside the Merton.

Just around the corner, you can walk along New Praya Kennedy Town, a street which runs so close to the ocean you can get sprayed if the waves are crashing.

Near the MTR Station, on Forbes Street, you’ll find a popular photo spot where a number of ancient banyan trees are slowly, slowly, winding their roots through the stone walls.

Kennedy Town has a swanky new public swimming pool in what looks like a spaceship that’s just landed. This is a great spot to cool down on a hot day, and even in winter months the outdoor pool is heated. Next to the pool is the Belcher Bay Park, a nice green space to stroll through, with a small playground.

There’s a small but historic site close to the park, Lo Pan Temple. Built in 1884, this tiny temple is dedicated to Lo Pan, the Patron Saint of Chinese Builders and Constructors, and the only one of its kind in Hong Kong. With 26 beautiful murals and distinctive architectural features, this little spot is definitely worth a visit.

What to eat and drink in Kennedy Town

K-Town has a reputation for having lots of great places to eat. If you’re near the Merton, be sure to try the brunch at Catch, or head around the corner to long-time casual dining eatery, Jaspas.

On the New Praya road, along the waterfront, tuck into proper UK-style fish and chips with a beautiful ocean view at Fish and Chick, or if you’re feeling for Mexican, Tequila on Davis is fun and festive (and delicious).

For something cheap and cheerful, head to the Smithfield Cooked Food Market, where you may not find a lot of English on the menu but plenty of pictures to point to. You can usually find different cuisines at cooked food markets—Hong Kong style, Sichuan, Thai, maybe Vietnamese, it all depends on the market itself.

Kennedy Town has its own local craft beer, at Little Creatures Brewing. With five different brews, ranging from IPA to ales, this is a great place to come and do some beer tasting, and they have an impressive menu to boot.

Where to stay in Kennedy Town

Kennedy Town only has two hotels, and the one in the heart of K-Town is Mia Casa Hotel. Just a block away from Kennedy Town MTR Station, Mia Casa has nicely renovated rooms, and a very cool rooftop area with a harbour view where guests can chill.

The other choice is Hong Kong Cosco Hotel, sort of an old school joint, but the rooms are clean and the price is right. This hotel is close to the Kennedy Town Swimming Pool, and has access to HKU MTR Station.

As this is a residential area, there are lots of Airbnbs available. If you don’t find what you’re looking for in Kennedy Town, head a bit more east towards Shek Tong Tsui or Sheung Wan, which has many more hotels available.

All Articles about Kennedy Town