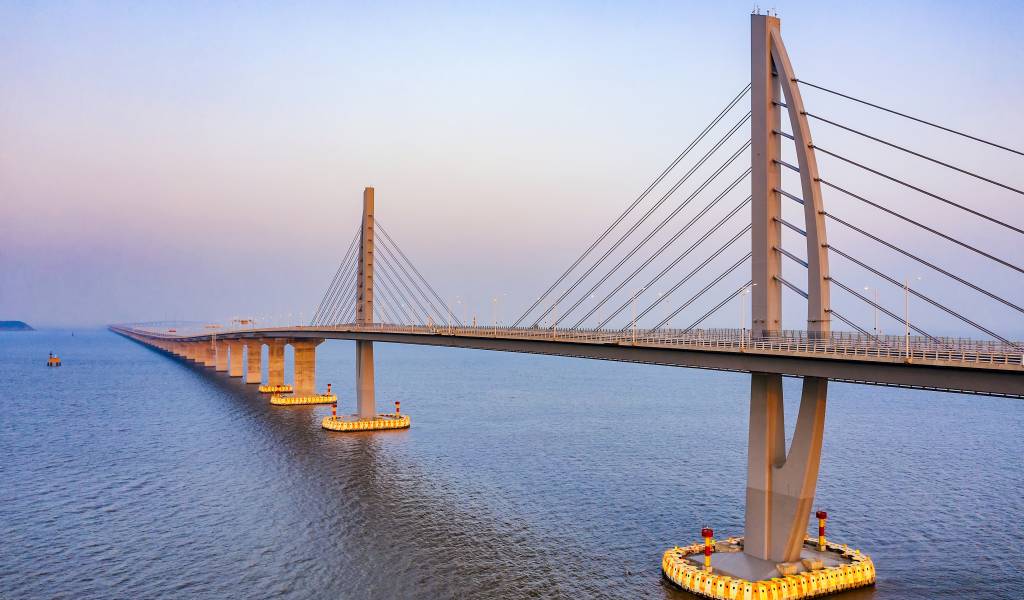 As Macau is looking to ease travel restrictions for Hong Kong travellers within weeks, it’s time to revise what are the best ways to cross the Macau-Zhuhai-Hong Kong Bridge.

Reminder: All travellers using the bridge will have to follow the latest COVID-19 prevention guidelines and quarantine requirements implemented by each city. Check the most updated information from your city and your destination before travelling.

About the Hong Kong–Zhuhai–Macau Bridge

The bridge offers an alternative way to cross between the three cities for as little as HK$65.00, which was mostly connected by ferry. It’s also largely shortened the drive from Hong Kong to Zhuhai from five hours to 45 minutes.

Guarding each side of the bridge are three boundary crossing facilities (Hong Kong and Macau, despite being handed over to China, still have a different political system and hence, each has a different border control facility).

How to cross the Hong Kong–Zhuhai–Macau Bridge

For preventing the spread of COVID-19, the ticket counter service for the Hong Kong-Zhuhai-Macao Bridge Shuttle Bus (Gold Bus) services is suspended. Passengers will have to purchase tickets in advance through the Gold Bus online platforms (Weixin official account: 港珠澳大橋穿梭巴士 or WeChat ID: hzmbus).

Routes: Nicknamed the Golden Bus, this HKMB shuttle service is the cheapest way to cross the bridge. The shuttle bus service operates two routes, Hong Kong–Macau and Hong Kong–Zhuhai, carrying passengers to and from the Golden Bus stops located at the three cities’ Boundary Crossing Facilities.

Bus ride duration: The ride on the bridge itself takes around 45 minutes.

Golden Bus Cost: Travellers can buy a ticket at passenger port ticket counters. A ticket costs HK$65.00. But if you’re travelling between midnight and 5:59 am, it’s HK$70.00.

The Zhuhai port will take Renminbi while the Macau port takes both Macau Pataca and Hong Kong Dollars, but will only give change in Macau Dollars.

Golden Bus luggage allowance: The bus also has a luggage policy. Each traveller can only bring one suitcase no bigger than 30″ x 20″ x 13″ and no heavier than 20 kg.

Sounds pretty straight-forward, right? There’s more to the journey. The three Boundary Crossing Facilities—where the Golden Bus stops are found—are on the outskirts of the cities. That means passengers will need to use other bus services to get to the Golden Bus stops (feeder routes aren’t provided by Golden).

Getting from Hong Kong to the Golden Bus station

Getting from the Golden Bus station to Macau

At Macau Boundary Crossing Facility, there are two buses (101X and 102X, both cost HK$6.00), that take passengers to downtown Macau.

Getting from the Golden Bus station to Zhuhai

There are a few coach companies that operate between the cities via the bridge. The One Bus Company operates a route between Yau Ma Tei (505 Canton Road) in Hong Kong to Macau, stopping at Sands Macao, The Venetian Macao and The Parisian Macao.

Tickets: You can get a ticket online if you’re travelling with One Bus. Their ticket booth is located at 535 Canton Road (next to the Hong Kong stop for the bus service) or at the three hotels when you’re in Macau. It costs HK$160.00 if you travel between 9 am to 6 pm and HK$180.00 after 6 pm.

Hours: The last One Bus coach from Hong Kong departs at 6 pm.

Hong Kong–Macau Express is another company running the route. The journey begins at Cross-Boundary Coach Terminus inside Elements (a shopping mall at Kowloon MTR Station). It makes an extra stop at Prince Edward (ChinaLink, Shop A, 695 Shanghai Street) before heading to Macau.
Although Hong Kong–Macau Express covers more hotels (Grand Lisboa, MGM Macau, Sands, MGM Cotai, The Venetian Macao, Galaxy Macau and StarWorld Hotel), each route will stop at only three of the hotels listed.

Tickets: For those riding with Hong Kong–Macau Express, find out more on the company’s website (in Chinese only) or get tickets from each of the stops.
Bus fare is HK$160.00 except for public holidays, which will cost HK$180.00.

Hours: Hong Kong-Macau Express operates from 8 am to 10 pm.

If you’re heading to Zhuhai Port, the Trans-Island Limousine is your coach service.
Check its multiple routes and timetable on its website.
The journey takes between 1.5 to 2 hours depending on traffic.

Hours: Different routes operate on different schedules for Trans-Island Limousine, between 7:25 am to 10:45 pm.

Can I drive across the Hong Kong–Zhuhai–Macau Bridge?

The new bridge is good news for those who are prone to seasickness, but it doesn’t mean that everyone can now drive across the bridge. Spanning across three different jurisdictions, drivers using the bridge will have to apply for multiple documents before their trips.

There are regular quotas for cars driving between Hong Kong, Zhuhai and Macau (which are all allocated for now).

However, drivers can go to Macau via the bridge and park their car at the Macau Port through the Park-and-Ride Scheme.

Here’s a brief explanation on how to do it:

Applying for a permit for the first time takes longer to process (around 12 days), so if you’re a frequent traveller using the bridge, you may consider getting a one-year Closed Road Permit and vehicle insurances.

Remember to bring all valid documents to travel to Macau or Zhuhai if you’re not a resident.
And if you’re driving, you switch driving from the left side of the road to the right side once you get on the bridge.

This post was originally published in August 2019. Last updated on June 29, 2021. Information is subject to change at any time.