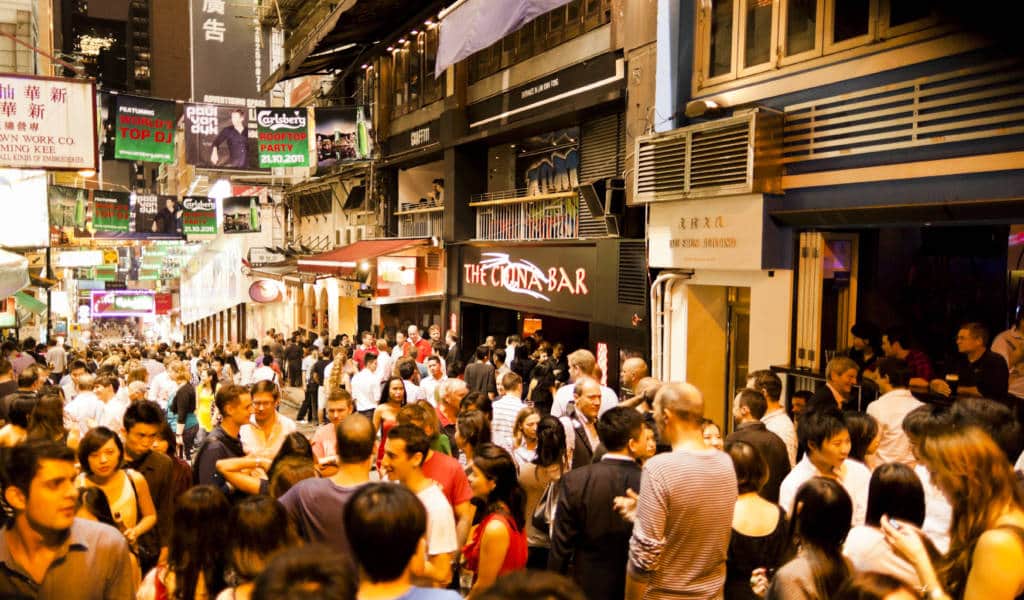 Don’t visit Lan Kwai Fong in the day time—you won’t see anything other than bankers in suits having a nice lunch.

But go on a Friday night, when the area transforms itself into a crazy pedestrianized party zone, and you’ll hear music booming out from every bar, people spilling out into the streets, funny costumes, stag nights and hen do’s, and all kinds of debauchery.

Lan Kwai Fong, or LKF as everyone calls it, has been Central’s hot spot for decades. Particularly popular with expatriate workers, it starts to roll around happy hour, and then picks up pace as the night goes on. Friday is the busiest night of the week, and the only night when it is closed off to cars.

There are dozens of bars and restaurants to choose from along the steep, U-shaped cobble-stoned strip, ranging from classy sake bars to good old fashioned British style pubs showing the game.

So how to decide which one to try? As mentioned, on a Friday night LKF becomes a pedestrian zone, so if you want to simply have a drink and a bite to eat while enjoying some prime people watching, you’ll be fine at pretty much any bar along the strip, though you’ll have to go early if you want to sit by the sidewalk.

If you’re on a tight budget, you’re in luck—there is one way to enjoy the party atmosphere without the expensive cocktails. The one and only 7-11 convenience store in LKF sells a wide range of ready to go alcohol, including cold beer and coolers. Many people choose to simply buy their drinks from ‘Club 7’, as this particular 7-11 is fondly nicknamed, and stand outside in the street like everyone else. This is totally acceptable.

For something a bit more upscale, the rooftop bar Ce La Vi at the top of California Tower building boasts gorgeous views, but has quite a high price tag. Brickhouse is a touch more casual, but still has a lively atmosphere and outdoor seating.

Got your dancing shoes on and don’t mind drunk people spilling your beer on you? Dance clubs like Dragon-i has been a long-time favorite in the area, though it gets competition from Rúla Búla and Vault. At a lot of these clubs, the party doesn’t really start pumping until well after midnight.

Being such a competitive area, bars come and go all the time, so your best bet is to just walk around and do some bar hopping. If you get hungry, just off of Lan Kwai Fong is Wing Wah Lane, nicknamed ‘Rat Alley’ by resident expats. Don’t let the name turn you off—it has loads of outdoor restaurants with fantastic food, and is always full of people.

Pro tip: Make new friends and get the best of the Lan Kwai Fong vibe with this pub crawl tour.

If you happen to be in Hong Kong on the night of October 31st, you’ll get to see the huge spectacle that is Halloween in Lan Kwai Fong. Halloween, along with Christmas and New Years Eve, are some of the events that draw huge crowds. LKF also hosts a number of annual events, including a Beer Music Festival, and a Japan Carnival.

Accessible, but hilly. Most restaurants and bars are not wheelchair accessible. No public toilets.