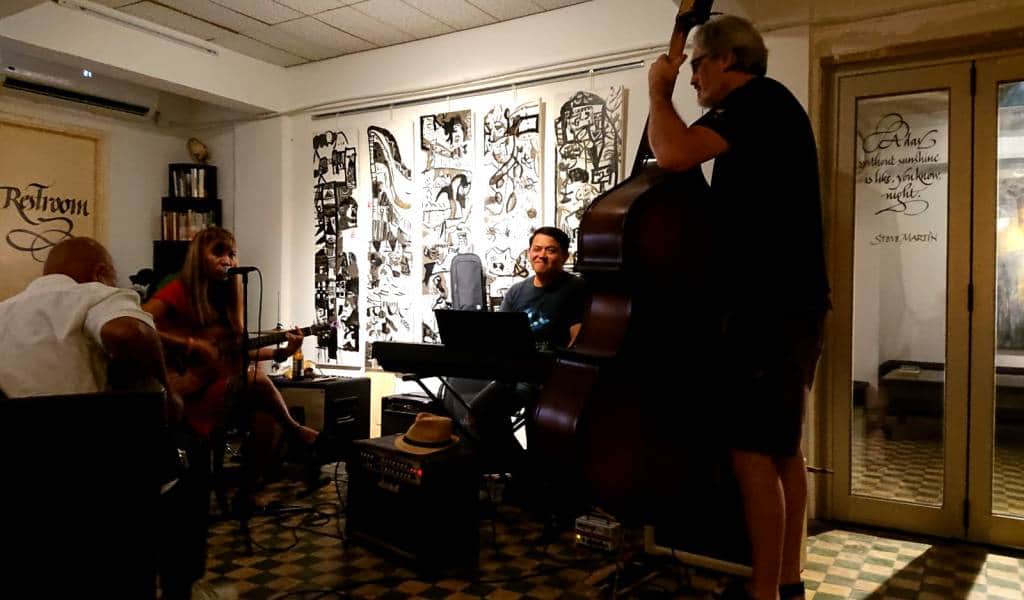 Known for its nightlife, Hong Kong is surprisingly limited when it comes to live music bars.

Here are 9 best bars to see live music performances in Hong Kong, all of which offer something truly unique—from a salon/live house to an underground metal venue to an old-world-inspired jazz bar in the city’s most glamorous hotel.

A local jazz mecca, the intimate Peel Fresco has been a rare gem since its opening in 2007.

The unpretentious, intimate live house focuses on jazz music, but also hosts rock and Cantopop music gigs occasionally. There is a small stage in the bar with leather seats lined up facing the stage.

Local legends like Eugene Pao and Ted Lo frequently play in the bar. You can also see Allen Youngblood and Wong Way Down perform there for a cover charge of HK$100.00.

There are also regular open mic and open jam sessions.

A historic music institution for Hong Kong, The Wanch has been throwing live music performances—accompanied by cheap beers—since 1987.

While it started as a place to listen to folk music, the bar is now a hot spot for local rock bands to hone their cover skills or showcase their original works.

It’s all very causal—just drop by, have a drink and leave anytime.

The Wanch sometimes hosts events like the H2 Music Festival.

Lost Stars is spacious compared to most of the other independent live houses in town, which allows for a good stage set-up for performers.

To be respectful to musicians on stage, Lost Stars has a set of house rules. Diners are only allowed to order food and drinks, enter or leave during intermissions.

The quirkiness doesn’t end after you walk through the front door. With a stuffed peacock welcoming you at the entrance, you can order one of Salon 10’s whimsical and creative cocktails.

It becomes a live jazz venue on Wednesdays nights.

In addition to its music offerings, Fringe’s location is also an attraction in its own right.

Once a Dairy Farm Depot in the early 1900s, the red-brick building housing the Fringe Club is now a Grade-1 heritage building.

The regular Big Band Night invites interesting jazz bands to perform. Most of the music performances happen at Fringe Dairy.

Once a well-kept secret among the enthusiasts, Visage One is a hair salon by day and a live music house by evenings at weekends.

The alleyway location is extremely intimate (tiny), allowing the audience to be only a few inches away from the performers.

Upon entering, Ben (the barber and the owner), standing behind the bar counter, will give you a drink and whisper the empty spot you should squeeze yourself into. There is a cover charge (about HK$100.00 to HK$200.00) that includes a drink.

Ben is also there to whisper stern warnings to those who chatter too loud during the performances.

There are a few chairs and tables, but most people don’t mind sitting on the floor or in the attic.

You may have to reserve a spot for some weekends—it’s best if you call in advance or stop by to say hi to Ben and find out about the latest arrangement.

Looking for a friendly crowd that will listen to your sorrows and share a cheap drink?

Bump into a local celebrity singer for a random open jam session, but you actually were more impressed by one of the random punters who sang earlier? It’s possible at Sense 99.

At least, that was our experience when we visited.

Once hidden inside a walk-up building, Sense 99 was hard to find not by intention, but by the owners’ carefree nature.

The bar has recently moved due to a rent hike. The new location may not have the same old-school charm, but it’s the crowd that makes it feel like home.

No other music venue has gone through as many hurdles as This Town Needs. Formerly named Hidden Agenda, the underground performance venue was put together by a few music-loving friends in Hong Kong.
It slowly grew into a legendary concert venue that attracted the alternative international acts such as Anti-Flag, Mono and Caspian.

In 2017, the venue was shut down (for the fourth time) by the government for not acquiring an almost-impossible-to-get license. The then-performing British math rock band TTNG (This Town Needs Guns) was arrested for alleged visa violations.The founders then got a license, moved out from the industrial building to a commercial space and gave itself a new name: This Town Needs.

The venue hosts the likes of As I Lay Dying, Slaughter to Prevail and Fat White Family.

It also hosts flea markets and festivals from time to time.

Located inside the ultra-luxury Rosewood Hong Kong, DarkSide isn’t the cheapest place to have a drink.

Opened in 2019, it has soon become one of the best live jazz bars in Hong Kong. There are jazz performances every evening from 8 pm or 9 pm.

Inspired by the jazz age of the 20s and 30s, the atmosphere is glamourous, yet friendly nonetheless.

Delicious cocktails are one of the reasons that set it apart from the other live houses in town.