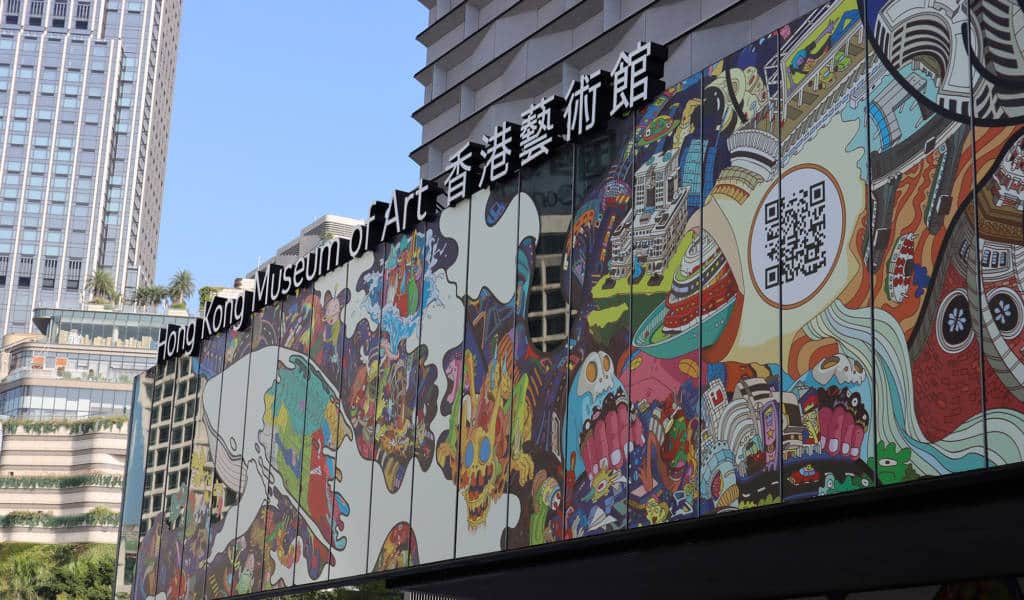 Know that everything-is-possible feeling watching makeover shows? Visiting the newly reopened Hong Kong Museum of Art will give you that awesome feeling.

Established in 1962, the Hong Kong Museum of Art was first a part of the City Hall High Block before moving to its current location in 1991. It was largely a windowless concrete structure with a dusty pink exterior like its neighbour, the Cultural Centre.

The renovation, undertaken by Hong Kong’s Architectural Services Department, has transformed the Hong Kong Museum of Art into an airy space with an unbeatable sea view.

Exhibition space has increased by 40% including a new nine-metre-high annexe gallery and an extended roof floor.

Here are eight things to know before visiting the new HKMoA:

1. Most of the Hong Kong Museum of Art is free

A new online registration system and an app are built for visitors to get their free passes before heading to the museum. If it isn’t a busy day, visitors can also get a token directly at the door.

Most exhibitions in Hong Kong Museum of Art are free of charge except for special exhibition.

A simple security checkpoint is added to the new museum.

There are also free lockers and cloakroom services.

2. Short on time? Start with this exhibition

“Ordinary to Extraordinary: Stories of the Museum” is an easy-to-digest exhibition showcasing the most interesting works from the museum’s four core collections: Chinese antiquities, Chinese painting and calligraphy, China trade art and modern Hong Kong art.

The exhibition put together 14 pieces of works that tell the most interesting stories about the museum of Hong Kong and the city itself.

It’s an educational exhibition that gives you an overview of the museum’s collection. Then you can decide where to spend time on the rest of the tour.

As the story goes: When the British were looking for new trade opportunities in the 18th and 19th century, they went to China via Hong Kong.

A small fishing village then, the beautiful landscape of Hong Kong had won over the commissioner Sir George Thomas Staunton’s heart.

A draftsman on that expedition then painted the “Waterfall at Aberdeen”—dubbed the first image of Hong Kong.

The painting was said to be a historical turning point for Hong Kong as it inspired Staunton to tell the House of Commons about Hong Kong in 1833.

Hong Kong Island became a colony of Britain in 1841.

Now displayed in the “Ordinary to Extraordinary” exhibition, it is part of the museum’s vast collection of China Trade Art.

You can find out more about how Hong Kongers hid and guard many of these paintings during World War II in another exhibition “Lost and Found: Guardians of the Chater Collection”.

Co-organized with London’s Tate, “A Sense of Place: from Turner to Hockney” is the only exhibition with an admission fee of HK$30.00.

The exhibition showcases 76 masterpieces to Hong Kong that illustrates British landscape paintings from the 17th century to now.

The dreamy oil painting of an English harbour by J.M.W. Turner and the 9×12-metre painting by David Hockney are two of them. Hockney’s painting is so big that it is housed in a separate gallery from the rest of the show.

After the introductory exhibition (see point #2) and the international blockbuster (see point #4), you should check out “From Dung Basket to Dining Cart: 100th Anniversary of the Birth of Wu Guanzhong.”

Considered one of the greatest contemporary Chinese painters, Wu was the first 20th-century Chinese artist to have a solo exhibition at the British Museum.

His painting of The Zhou Village once fetched HKD 236 million at an auction in 2016.

He went to Paris to study arts in the 40s before moving back to China in the 50s. Hence, his intriguing works are influenced by both the East and the West.

During the Cultural Revolution, he was disallowed to paint. Many of his works were destroyed.

The hardships he endured are later expressed in his painting “Bitter Melon Homestead.”

But there are 11 exhibitions in total to choose from and many of them feature local artists.

Some exhibitions showcase local works including the two interactive shows about the landscape.

Some 14 pieces of specially commissioned artworks (inspired by the 14 masterpieces inside the museum) are scattered around including one by the legendary Frog King.

And of course, the “Hong Kong Experience • Hong Kong Experiment” is an extremely detailed exhibition that showcases a huge number of pieces that tell the history of Hong Kong art.

We’ve mentioned it before, but it’s such a great view we will dedicate a point for it here, too.

The new Hong Kong Museum of Art also has a harbour-facing restaurant HUE and an alfresco café (INK Cafe) along the Avenue of Stars.

The Hong Kong Museum of Art app is where you can get free passes easily.

The app also doubles as an audio guide for some important pieces.

By downloading a supplementary app called Stamp By Me, you can use the app as a stamp book to collect stamps across the museum in exchange for a small gift.