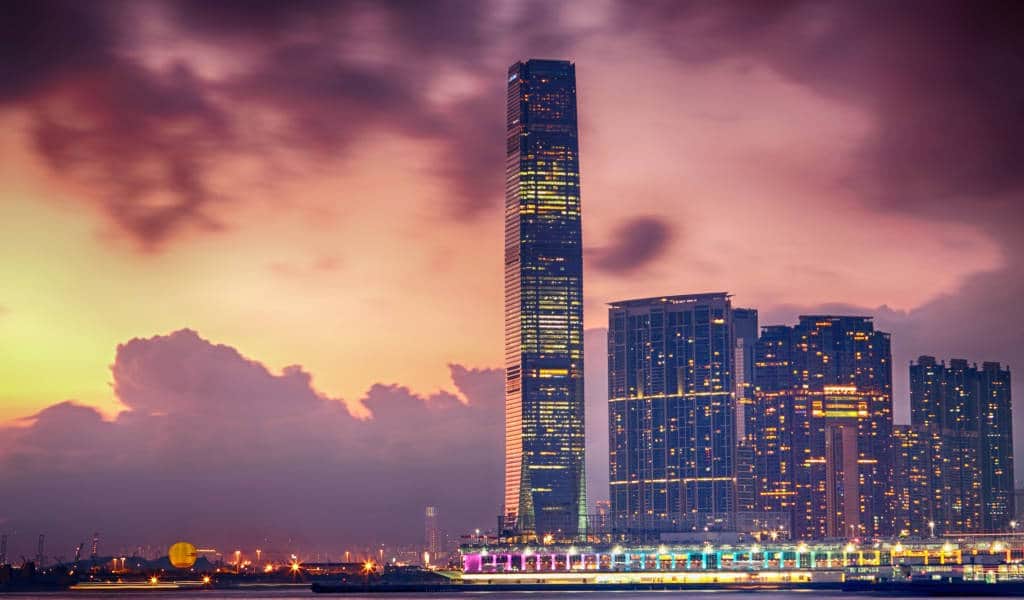 Just next to Tsim Sha Tsui is West Kowloon, an area that in recent years has blossomed into a cultural, entertainment and transportation hub.

West Kowloon is a true testament to Hong Kong’s determination—and ability—to create amazing new things. And it all happens in a short period of time. What was once empty reclaimed land now holds Hong Kong’s highest skyscraper, a brand new high-speed train terminal, and world-class facilities designed by renowned architects.

There’s also modern shopping malls, amazing restaurants, and tourist attractions to visit. Read on to learn more about what this area has to offer.

What to see and do in West Kowloon

Kowloon Station is located inside Elements Mall, a sparkling modern shopping complex with high-end brands and lots of restaurants, cafes and bars. There’s also a fancy cinema, and, believe it or not, an ice rink where you can go skating!

West Kowloon is also home to the new High Speed Rail, which now connects Hong Kong with a number of cities in Mainland China. From Hong Kong West Kowloon Station you can quickly travel to nearby cities such as Shenzhen and Guangzhou, as well as long-distance routes to Shanghai, Chongqing, Tianjin and Beijing.

Nearby is the International Commerce Centre (ICC), the tallest tower in Hong Kong. Standing at 484 metres tall, it is the 12th tallest building in the world.

Every night the entire ICC lights up in a dazzling display of lights and music. This Guinness record winning choreographed LED light show takes place at 7:45 pm, 8 pm and 9 pm. However, you need to be on the other side (i.e. on Hong Kong Island) to really see it. The show is best viewed from the Central Harbourfront, by the Central Ferry Piers, or from the viewing decks of the second tallest tower in Hong Kong, the International Finance Centre (IFC).

The ICC is also home to Sky100, an observatory located on the 100th floor of the ICC. From Sky100 you have incredible views of both Hong Kong Island in front of you, and the expanse of Kowloon all around you.

In front of the ICC is the West Kowloon Cultural District, a waterfront area where a number of new attractions have been built.

One of the recent additions to the West Kowloon Cultural District is the Xiqu Centre, which is dedicated to promoting traditional Chinese opera and musical theatre. The centre’s Tea House Theatre Experience is a 90-minute introduction to Chinese opera, replicating an old -ashioned performance in a tea house, complete with Chinese tea and dim sum served during the show. The Xiqu Centre holds a number of live performances, workshops, and free events.

Freespace is the new centre for contemporary performances, with theatre, dance and music on stage. Nearby is the Art Park, an open space with a gorgeous harbour view, plus bike rental facilities, which gives you the very rare opportunity to cycle along the waterfront.

The West Kowloon Cultural District has a number of other large-scale projects currently under construction, including two new museums (like the 17,000 sq m M+ museum of visual culture), and a new theatre facility, which will attract world-class performances once complete.

What to eat and drink in West Kowloon

While in West Kowloon, take the opportunity to boast that you had a drink at the tallest bar in the world. OZONE, located on the 118th floor of the International Commerce Centre, is the rooftop bar of the Ritz-Carlton Hotel. This bar is so high up that your ears pop a few times while riding the elevator. And the views sure can’t be beat, even if the drinks are a bit expensive.

Right on the waterfront of the West Kowloon Cultural District, you’ll find Café Bohème, a French and Italian restaurant with incredible views of Victoria Harbour.

Elements Mall has no shortage of restaurants to choose from. However, the ones with the best atmosphere are found in Civic Square, an outdoor piazza with eight restaurants and outdoor seating. Enjoy Argentinian steak at TANGO or Peking duck from The Pond. Or simply have some cold pints at McSorleys pub, or longtime favourite Stormies.

Where to stay in West Kowloon

It costs a pretty penny to stay in West Kowloon, with only two high-end hotels to choose from.

The Ritz-Carlton is of course an exceptional hotel, catering to the rich and famous. To stay in this lap of luxury will only cost you about HK$2,700.00 a night.

Slightly less expensive but still very high-end is the W Hotel, which boasts an unbelievable hot tub facing Victoria Harbour, a rooftop pool, a spa and gym facilities, for roughly HK$2,000.00 a night.

Because of West Kowloon’s proximity to Jordan, Tsim Sha Tsui and Yau Ma Tei, true cheapos will simply pass through West Kowloon, en route to more affordable places to rest their head. Be sure to check out our Hong Kong area guides to get more info about what to see and where to stay in these popular districts.

All Articles about West Kowloon