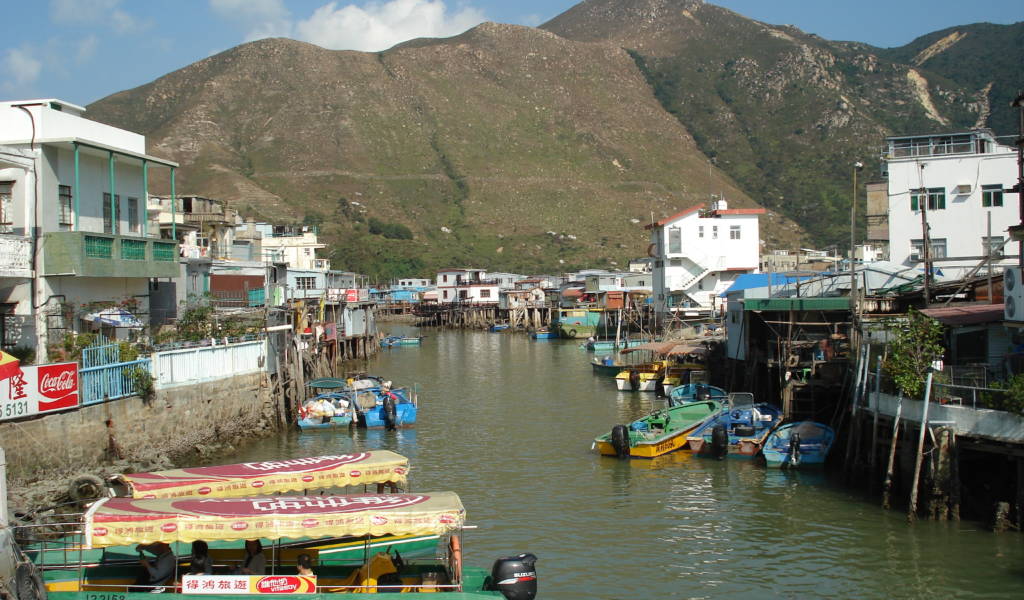 Tai O often comes as a surprise to tourists visiting Hong Kong. After all, it’s hard to imagine that this remote fishing village somehow manages to coexist in the same place as Mong Kok, Central or Wan Chai, which are its polar opposite.

No, you won’t find skyscrapers, neon lights or luxury stores in Tai O. Instead you’ll find yourself wandering through narrow alleys with curious looking dried seafood, bamboo baskets of pink shrimp paste sitting in the sun, tiny temples by the sea, and traditional stilt houses, still used by the Tanka fishing community.

This once isolated village on the southern tip of Lantau Island is no doubt unique. And with only one tiny winding road through the mountains for access, it is easy to see how Tai O has remained largely unchanged.

The area where you arrive at the taxi stand or bus terminal is the entrance to town, where you will find a small market, with dried seafood, bakeries selling local treats (be sure to try some!), interesting souvenirs, and some cafes.

Follow this path and you’ll reach the bustling waterfront, with a drawbridge that connects to the other side. This is where boat drivers wait to take you on a ride to see the endangered pink dolphins of Lantau—another thing which has put Tai O on the map.

Value tip: This pink dolphin sighting tour can be booked online, and has a come-again voucher in case you don’t see any dolphins.

The waterfront is also where you’ll find the traditional stilt houses which Tai O is now famous for. A few years ago the Hong Kong tourism authorities tried to promote it as ‘The Venice of the Orient’, but if you’ve ever been to Venice, you’ll be sorely disappointed by the strange comparison.

For the fit: Kayak tours of the coast of Lantau Island, including Tai O, can be booked online.

At low tide the muddy flats aren’t much to look at; it’s more picturesque at high tide when you can see the boats come back to tie up for the night and fishermen climbing the bamboo ladders up to the houses.

If you have time to stay the night, the Tai O Heritage Hotel is really something special. A former police station from British colonial days, it has been converted into a beautiful hotel, with sweeping ocean views.

Tai O holds a unique dragon boat race, known as the Tai O Dragon Boat Water Parade, so if you happen to be in Hong Kong in June, this is a great chance to see the entire town come to life for this local festival.

How to get there

Tai O is not all that easy to get to, and can only be reached by New Lantau Bus, or by blue taxis, which only operate on Lantau Island. You cannot take a red or green taxi from Hong Kong Island or Kowloon to get there, as they are not allowed on the restricted South Lantau Road. You can, however, catch blue taxis in either Mui Wo or Tung Chung.

Here are the three bus routes that connect you to Tai O:

Accessible, but may need assistance going over the bridge. Wheelchair accessible public toilets are available.