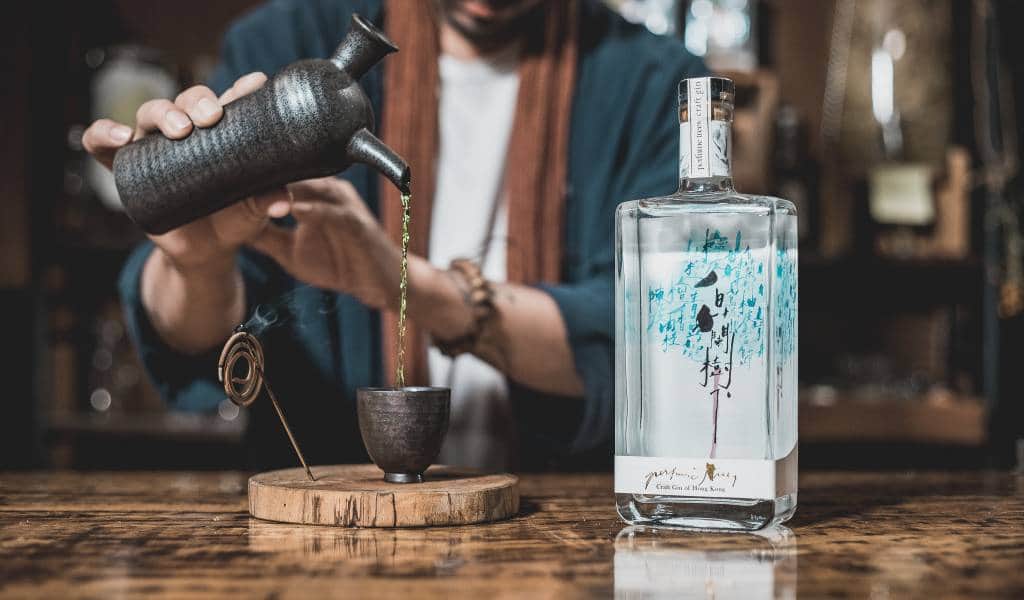 Whether it’s gin, liqueur, cocktails or hard seltzer, more and more Hong Kongers are having a go at creating their own spirit drinks, and several are causing quite a stir…

When compared to a decade ago, alcoholic spirit brands conceived in Hong Kong are no longer a rarity. Today, one can even spot several brands sitting on the shelves of local liquor stores.. However, the scene is not nearly as prevalent as craft beer is in the city. There are a couple reasons for that. “For one, it’s really hard to get a distilling license in Hong Kong,” claims Jo Hartwick, manager of Ginsanity, a Causeway Bay based store that features over 200 gin brands from around the world. “And, Hong Kong has a 100 percent spirit tax.”

So, spirit-based drinks that are created with the city in mind might be distilled or bottled somewhere else (which will be noted below). “Making any liquor in Hong Kong is an incredibly licensed process,” says Paul Harper-Cox, founder of the increasingly popular and controversial local brand Fok Hing Gin. “We just decided that wasn’t a journey we wanted to go on. But we wanted to show that we are authentically born of this city.”

Rest assured, unlike the beleaguered Handover Gin brand, which was caught importing and relabelling New Zealand gin as Hong Kong’s own in 2020, all of the brands described within this article have conceived, branded, designed and tinkered with their drinks in Hong Kong, even if pricing and practical issues have forced them to distill and/or bottle elsewhere.

Amongst today’s selection of Hong Kong spirits, gin dominates, as local drink makers are taking full advantage of a wide range of herbs that are unique and available here. Yet there’s also room for canned drinks, hard seltzers, bottled cocktails and various liqueurs. “I think we support each other,” says Dennis Mak, founder of the liqueur brand Magnolia. “The barrier for entry has become lower and lower now. When we see someone making a new drink, it means we can do it too!”

What follows are 10 notable spirit makers who are making a name for themselves in Hong Kong—and beyond.

Nick Law and Jeremy Li consider themselves “Not Important Persons”–hence the name–but are crafting gin with the “Hong Kong spirit” at the forefront of their minds. Their gin is distilled in Hong Kong using a specially crafted copper still made in Germany with the capacity to make 220 litres in one go. 21 botanicals are used to make N.I.P., including longjing and shoumei tea leaves, aged tangerine peel and goji berries. “What we want to achieve with our recipe is to find a harmony between various aromas and flavours to create a complex yet balanced spirit, and at the same time pay tribute to our roots, the heritage of our city and our people,” says Li. The result is a sweet scent and taste that gives way to a long, spicy finish.

She was a programmer at a startup. He was in hotel management. Together, Hong Kong natives Dimple Yuen and Ivan Chang love gin, particularly of the dry London variety. So they became the first distillery in the city to get a license (and Dimple became the first-ever female distiller). Since 2019, the Chai Wan based copper distillery has been home to Chinese apricot kernels, dried tangerine peels, liquorice root and more “to create a flavor inspired from Cantonese stir-fry philosophies, complex and well balanced,” says Yuen. “As a place that is not traditionally known for making gin, we’re just proud that we’re able to put our city on the map!”

Can’t get enough? Try their Calamansi Gin, distilled in a handmade mini-still created by two of the last coppersmiths in the city.

After several years of experimentation, Dennis Mak (a former bartender) and James Ting Ho (Chinese medicine practitioner) finally hit upon their recipe for success this past August: a healthy Chinese medicinal herbal liqueur that tastes good. Call it Magnolia, a thick, sippable drink with more than 10 local ingredients. “It’s a combination of five flavours-sweet, saltiness, tartness, bitter and pungent, or spicy, all in one sip,” says Mak. With every bottle taking more than three months to complete, the Chai Wan based duo envision the brand as a journey — and they have a long way to go. “We spent a lot of time to strike a balance between the East and the West, the whole branding, the whole presentation,” says Mak. “We want to sell it as a complete brand, where we can be compared to any other liqueur in the world.”

Eddie Ng has been making homemade umeshu for over 15 years, but it’s only a couple years ago that the filmmaker hit upon the “classic” 30% ABV formula he desired to make Tinshing Umeshu go public. The process takes a year, as the optimal plums can only be sourced over the course of a month, then they have to be added with sugar to brew in a specially created wine base. Hence the output is limited. “To me, the making of umeshu is not just about making wine, it is like rewinding your memory,” says Ng. He claims there’s a world of difference between his Hong Kong creation and established Japanese releases, and seeks inspiration from the city’s new gin brands. “We look up to how they do their marketing and how they build up their image on Instagram,” says Ng. “With Tinshing Umeshu we are selling a living attitude.”

Can’t get enough? Mix it with soda to dilute and pair it with some chip and dip.

With backgrounds in marketing and bartending, Benny Yau, Dave Tse and Jacky Chan formed a do-it-yourself cocktail business called Homeshake, emphasizing local flavors, which lead to Tipsy Cat. The term stems from a Cantonese slang term meaning “drunkard” in English. “The design of the iconic Tipsy Cat is him doing a “drunken fist” with a traditional Chinese spirit container, calabash, tied to his waist,” says Chan. “The uniqueness of Tipsy Cat is then established with these traditional elements.” The taste is a perfected 7% ABV mixology blend of citrus and tea leaves designed to resemble a drink found at a traditional Chaa-Chen Tang. As their classy bottle and design become more ubiquitous around the city, the trio hope people see the drink as a way to casually relax. “We appreciate the rise of the recognition of local brands in the market,” says Chan. “The homegrown spirit has added colors to the current market as more stick to local needs.”

Can’t get enough? Check out one of their Homeshake DIY cocktail kits.

Leigh and Scott Powrie are an American-born couple already known for the Hong Kong based craft beer brand Double Haven. During the pandemic, they also saw a need for drinks that could appeal to people with pent-up lifestyles who desired to be outdoors. “We wanted a drink we could come home to and enjoy that was light, refreshing and health conscious,” says Leigh. Dragon Water, the city’s first spiked seltzer fit the bill. Brewed with sugar, gluten-free and light on calories, the four core flavors (Cucumber-Watermelon, Lemongrass Lime, Black Raspberry and Yuko Ginger) also offer an East-meets-West blend. With fast growth across the city, the duo aim for more seasonal flavors and international expansion plans soon. “We knew from the start we wanted to use the best ingredients, with the best team at one of the best breweries in Asia, and knew that would be Hong Kong,” says Leigh.

Former bartender Kit Cheung Yan-kit and partner Joseph Cheung met at a cocktail workshop and for the past three years, they’ve been camped out at Tsuen Wan’s Tankyu, their “dwelling in the hills where spiritual immortals live and gather.” Aiming to capture a generation in a bottle, Perfume Tree uses such botanicals as sandalwood, white champaca, coriander seed, Chinese angelica wood and liquorice to give their gin a spicy and fragrant flavor that’s a “romantic letter to our hometown”. It’s then bottled in The Netherlands. “Perfume Tree cuts through other flavors in cocktails,” says Ginsanity’s Hartwick. “It’s probably one of the more influential locally made drinks because the guys behind it are big on the scene.”

Can’t get enough? Look for their soon to be released Pale Ink, a sugar-free coffee liquor, which represents a “chapter of the gloomy chaos the world witnessed the past few hundred days”.

It was kismet for British born consultant Paul Harper Cox when he came across the street Fuk Hing Lane while on a bus in Causeway Bay. At the time, he’d been working on making a gin using more than 10 Hong Kong based botanicals, and after 13 tries, he got the recipe right. Presto, Fok Hing Gin was born. “The gin has started a conversation,” says Cox. “I’m hugely proud of starting a brand in a pandemic and where people can resonate with a brand and what it stands for.” The brand’s name was recently called out by Britain’s regulatory body for alcohol, but it may turn out to be the best thing to ever happen to Fok Hing Gin, to the tune of 15,000 bottles sold to date. Cox even admits to small batch bottling in the UK, but stresses that the brand’s heart, soul and design are firmly with Hong Kong. “There’s more to a Hong Kong brand than just being made here,” he says. “How do you take an infusion of the boiling pot of Hong Kong and bottle it? Making sure the botanicals are from here is a key component.”

Can’t get enough? Look for their mandarin infused, limited edition Five Blessings, with more expressions expected to be unveiled next year.

Already a well known craft beer brand in Hong Kong, Gweilo Gin was born, ironically, during a craft brew collaboration with Kagua in Japan three years ago. “We added 12kgs of fresh yuzu rind to the beer during fermentation and when we tipped it into the dry hop vessel, the whole brewery filled with a sweet lemon aroma and we discussed how it would also make an amazing botanical for a gin,” says Gweilo founder Joseph Gould. The need for specialist equipment and expertise means that the successful citrus-leaning gin is bottled in the UK. But with an R&D center in Kennedy Town, Gweilo is riding out the pandemic here, with further plans ahead. “Our gin took shape through exploration and I think that’s a key element of this city,” says Gould. “The beverage scene is continually evolving and hopefully our gin reflects that — interesting, delicious brewing ingredients being applied in another medium.”

Can’t get enough? Gweilo Gin’s pre-made gin and tonic cans can be found in a growing number of outlets across the city.

After spending time overseas, former Rolls-Royce exec Allen Zhang couldn’t find any good local hard seltzers, so what’s a guy going to do? Create one during a pandemic, no less. But look for the Hong Kong landmarks on the cans. They’re the sole tipoff that BubbleMe Hard Seltzer is a local brand, despite flavors perfected in Japan and canning done in Vietnam due to economic factors. “The key to BubbleMe’s success is our flavor-profile, which has been fine-tuned to cater to younger, mid-premium Hong Kong consumers,” says Zhang. “We use zero calorie sweeteners like monkfruit to maintain zero sugar.” With flavors like mango-peach and lychee-lime, Zhang claims he’s “laser focussed” on becoming the city’s leading beverage brand. “The fact that we have sales in areas like Tuen Mun and Kowloon Bay tells me that it’s not just expats who like seltzers, but the locals are starting to love it too.”

Can’t get enough? Look for the Strawberry Earl Grey or write in with your own suggestions. BubbleMe is open to new ideas.