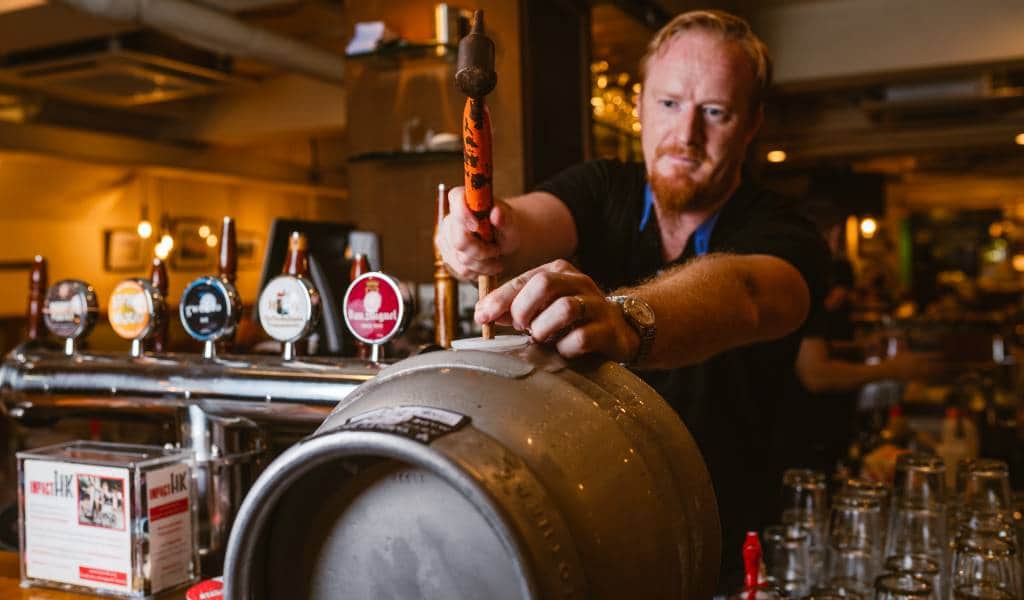 For nearly two decades, Hong Kong Beer Co. was the lone local brewery in the city, trying to find shelf space alongside the mega-lager brands of the world. And then, in recent years, craft beer lovers from all corners suddenly crawled out from their makeshift kitchen breweries, cradling their experimental brands of yeast and unique, flavoured visions.

“Many of today’s big local beer makers were sitting around a table talking about their love of craft beer, which is when the Craft Beer Association [of Hong Kong] was formed,” says Luke Yardley, creator of the local brand Yardley Brothers. “It was in its infancy for a long time. Now it’s a teenager who has just finished university. We’ve developed and grown and have some skills. There’s plenty more to go.”

While Hong Kong Beer Co. celebrates its 26th anniversary this year with some limited releases, it’s now sitting on store shelves alongside new local craft brands like Young Master, Carbon Brews, Black Kite, H.K. Lovecraft, and many more. Their common themes include a devotion to quality, a willingness to experiment (nearly all of the breweries feature a release with local Hong Kong flavours), and often a colourful design on a can or bottle that was created by a homegrown Hong Kong artist.

“I think there are at least 35 local craft breweries now in the city,” says Jess Hanson, production manager at Young Master Brewery in Ap Lei Chau. “There’s a lot of passion to make it, whereas elsewhere it might just be seen as a job.”

Young it may be, but what the city’s craft beer industry is also doing is impressing local and global drinkers. The city’s beer makers attribute this to the idea that because Hong Kong’s rents are so high, the quality has to be there, or else. In addition, many of the brewers are global in their approach, have been exposed to what “good” beer is and can afford to buy the best possible ingredients with which to make their brands. “Last year at the Asia Beer Championship, Hong Kong ranked second in gold medals and first in total medals,” claims Jason Lowe, president of the Craft Beer Association of Hong Kong. “Even in worldwide competitions such as the Australian International Beer Awards, Hong Kong breweries have been consistently performing well and picking up more gold medals every year.”

With high quality comes interest. Whereas the city’s hotels and bars wouldn’t give a locally made brew the time of day in the past, these days they are offering tap space and are even keen on special exclusive collaborations. “What’s taken some cities 20–30 years to develop their beer scene has only taken Hong Kongers less than 10 years to get there,” says Carbon Brews founder Chris Wong.

Here are just some of the notable brands to look for the next time you’re in a hip bar or bottle shop:

With two breweries, six core beers and a new experimental release every month, there are general murmurs of recognition that Young Master Brewery is the star on the local brew scene. Formed by former Goldman Sachs investment banker Rohit Dugar in 2013, the brand bills itself as “Asia’s leading craft brewery.” “We wanted to set the bar,” says Hanson. She may be right, as the Contemporary Pilsner is a tasty delight all year round and Tsa Tsa Tseng Salted Lime offers a cool, sour twist on a traditional Hong Kong cafe refreshment.

The three-year-old brand was created when a branch of a well-known Japanese craft brewery closed shop. Carbon Brew’s name pays tribute to the science behind brewing high-quality beers.

The 18-member staff claim to run the largest craft brewery in the city and being a democratic group, all members are allowed to propose ideas. “We brew two to four new beers every month and we’ve just turned three last week, so I think we’ve made around 80 to 100 so far,” says Wong. That includes two IPA collaborations with well-known Hong Kong cinematographer Chris Doyle (a legendary beer lover) called I Drink Therefore I Am and Like the Wind.

Feeling brave? Sip the #OOTD, a fruity sour beer with an infusion of coffee beans.

This brother duo was once making home brews in a small Lamma Island shack, but now founder Luke Yardley has graduated to a 5,000-square-foot brewery in Kowloon (with an even bigger one on deck for next year). “My main focus is enjoying playing with ingredients and pushing the boundaries of what can be done with beer,” he says. That means four core beers, and two experimentations a month. The pale ale Machine Man is their best-seller, made with hops that are freshly cut then frozen with liquid nitrogen.

Feeling brave? Search for the in-demand Mango Sticky Mango, a 9.5% ABV made with real mango and coconut fruit.

Following a two-year beer-making course in Germany, H.K. Lovecraft founder Perry Lam imported German equipment to his Tsing Yi brewery where he specializes in five core lagers with an additional array of seasonals. “Our lagers are unpasteurized and unfiltered,” he says. “You can really taste the yeast.” With locally created can designs and a willingness to use homegrown ingredients, he’s all-in on Hong Kong’s craft scene. King in Yellow, a rich and fresh lager, is their best-seller.

Though they formed a mere three years ago, the eight staff members at Deadman are already super busy. After all, the San Po Kong–based brewery is already supplying 80 local restaurants and bars, as well as exporting their four core beers and crazy can designs to Singapore and Japan. “It’s good times here,” says brewer Sherman Chan. “And amazing as more breweries join the game.” The brand will even be collaborating with H.K. Lovecraft on a seasonal oyster lager towards the end of the year. 5000 Years, a German pilsner with hints of cucumber, is their go-to.

Feeling brave? Hop aboard the Pineapple Express, a powerful 10.3% IPA with fruit flavour for days.

Hong Kong–based brothers David and Dan Gallie formed Black Kite in 2014 after leaving their finance and IT jobs. Their goal was to create craft beers that use fresh ingredients from around the globe as well as a wide array of regional flavours. This has resulted in three core beers with seasonal specials and an ongoing sour series. “We want our beers to give you the carefree feeling of soaring through the city, free as a bird,” says co-founder David Gallie of their Wong Chuk Hang–based brewery. With its welcoming citrus flavour, it’s hard keeping their Birds of Prey IPA in stock.

Feeling brave? There’s a wide array to choose from, but Jumbo Orange Ice Cream Swirl Milkshake IPA will have you dreaming of ice cream trucks in the summer heat.

Based in Yau Tong, this four-year-old brewery is a supergroup of sorts as the trio behind it are all involved with other craft breweries in the city. With 40 creations and unique can designs to their name, the vision behind the brand is to focus on what beer drinkers themselves enjoy. “Our beer creation process starts with an in-depth interview with a beer lover to learn about his/her background, values, passions in life and most importantly, passions for beer,” says co-founder Jason Lowe. “When you drink a Heroes beer, you are also tasting the beer hero’s story, passion and superpower.” Start with the gold-medal-winning Hangry Donut, an American wheat beer with hibiscus, and go from there.

Feeling brave? Enter the villain’s lair with a Snap-09, packed with notes of toffee malt, cookie dough and 9.0% power.

Once a derogatory Cantonese term meaning “white ghosts”, the word is now perceived as one of endearment amongst expats in Hong Kong. Hence the name, which a trio of would-be British beer makers adopted in 2015. Since then, they’ve developed seven core beers, a brew for Cathay Pacific Airlines, a non-alcoholic variety and even have a restaurant based in Kennedy Town called Grain where their research and development takes place. “We test 500 L batches of our new recipes and brew batches to optimise our existing beers, on which we can then get instant feedback from our customers,” says commercial director Henry Atkinson. Their pale ale is not only ubiquitous in the city, but is now exported to 13 countries.

Feeling brave? Go for dessert with a taste of their Blackberry Maple Creme Brulee.

This husband and wife team had a background in beverage management and decided to enter the craft brew industry in 2017. They also claim to be the first Asian brewery to infuse their beer with tea leaves. Though they’ve developed nine varieties since their start, they maintain four beers as their core. “We are the smallest brewery in Hong Kong, in terms of brewery size, as well as manpower. It’s only myself and my husband!” says co-founder Wendy Tai. With stock in local supermarkets and global expansion plans, they’ve got their hands full making that Earl Grey Amber Ale.

What’s the surest way to know you’ve created a scene that has value? When the big boys try to muscle in on the market share. In this case, Carlsberg recently teamed up with Brooklyn Brewery brewmaster Garrett Oliver to create a trio of beers that feature local ingredients which instantly appeared on shelves. “YAU craft beer celebrates the spirit of Hong Kong with three local flavours, each hilariously named after a quirky Cantonese phrase used to describe different types of friends,” says a YAU spokesperson. This includes a new recipe for their German-influenced Bor Yau Lager, which features chenpi, a dried Mandarin peel.