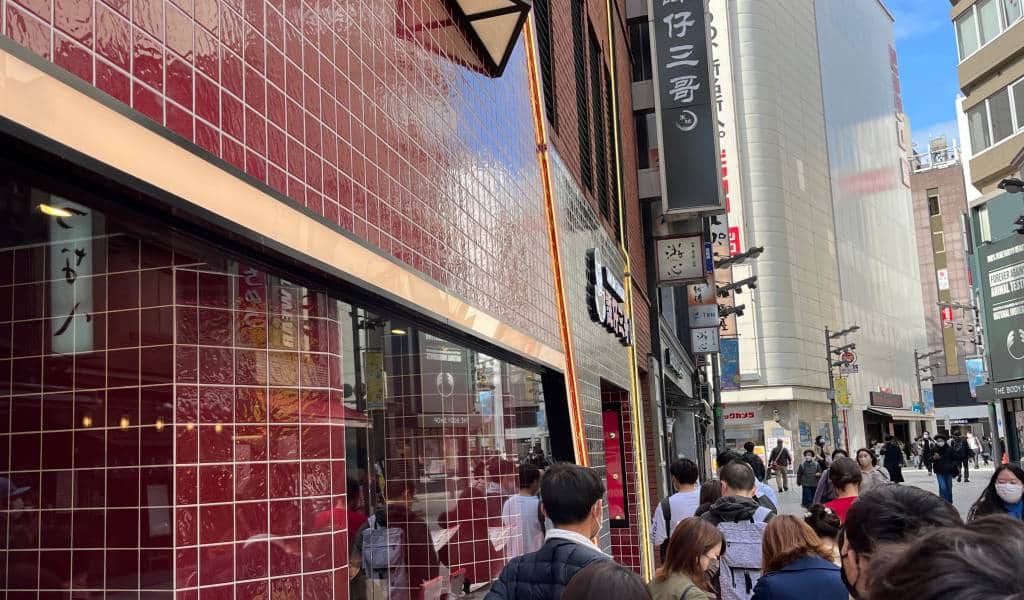 Tamjai SamGor Mixian, the McDonald’s of Hong Kong rice noodle chains, has landed in Japan. The two new stores—in Shinjuku and Kichijoji, Tokyo—have both been attracting long queues since their first days. But do the cheap Hong Kong noodles stand a chance in the ramen-loving nation?

Our Tokyo Cheapo colleague recently visited the Shinjuku store to find out if the people in Japan approve of the spicy rice noodles.

If you live in Hong Kong and have never heard of Tamjai SamGor Mixian, it’s the ubiquitous mixian (rice noodle) brand with a smiley SamGor, translated as the third brother in Cantonese, logo.

Opened in 1996, SamGor soon became a local favourite with its Sichuan-inspired spicy rice noodles. Patrons could choose their own ingredients, broths and types of noodles.

In 2008, the brothers became estranged and the family split the business into two rival brands – Tamjai and Tamjai SamGor. It wasn’t until Japan’s Toridoll, a mega noodle corporation, bought the two brands for HKD1.9 billion in 2018 that the two brands were reunited under one family.

Having a preference between Tamjai and Tamjai SamGor and being able to slur out your order within three seconds are two of the benchmarks showing you’re becoming a Hong Kong local.

(Hong Kong local tip: You can also rise above the others by saying you prefer a real local mixian noodle shop in a random small alley. Here are some local rice noodle shops you can try)

Hong Kongers love Tamjai/SamGor and we love Japan. So it has been a trending topic ever since the announcement of the first Japan Tamjai SamGor.

But, seriously, if you haven’t tried rice noodles, find your nearest SamGor on this website and try some while reading this.

Curious how it fares in Japan, our colleague visited the Shinjuku store last week.

Despite visiting after normal lunch hour on a weekday, there was still a 40-minute queue outside the shop. Slightly shorter than the two-hour wait time at the weekend some bloggers said.

The menu is very similar to the Hong Kong store with its signature broths and toppings. The spice level is also the usual confusing scale–10 being the mildest and “little spicy” is already pretty spicy.

The menu even features some of the most popular sides from Hong Kong like TuFei chicken wings and Sliced pork belly with mashed garlic.

Some other Tokyo-based Hong Kong bloggers have also reviewed the new shops. Most of them agreed that the flavours are very similar to the Hong Kong Tamjai SamGor.

But there are a few major differences:

Our colleague ordered a spinach and baby octopus mala mixian (hot and numbing) and a sanla mixian with coriander, pork slices and quail eggs (hot and sour soup).

She and her food companion both enjoyed the noodles, especially the al dente rice noodles, the rich soup and the generous portions. Although level 3 spicy made them sweat, they enjoyed the heat and flavours.

The only shortcomings may be – that the staff is still familiarising with the complicated ordering system and the “overall experience did have a chain restaurant feeling.”

But they are both satisfied with the meal – which cost them only around HK$200.00.

What’s next for Japan’s Tamjai SamGor

The company has planned another opening in Tokyo. It aims to open 25 stores in Japan by 2024.

The next Tamjai SamGor will open in the desirable Ebisu area – with sought-after classic izakaya and Michelin-star fine-dining restaurants — in May.

We are interested to see if Tamjai SamGor will be able to find its footing amongst the local Japanese crowd in the food capital, but before that, it certainly serves as a warm homesick cure to any Hong Kongers in Japan.