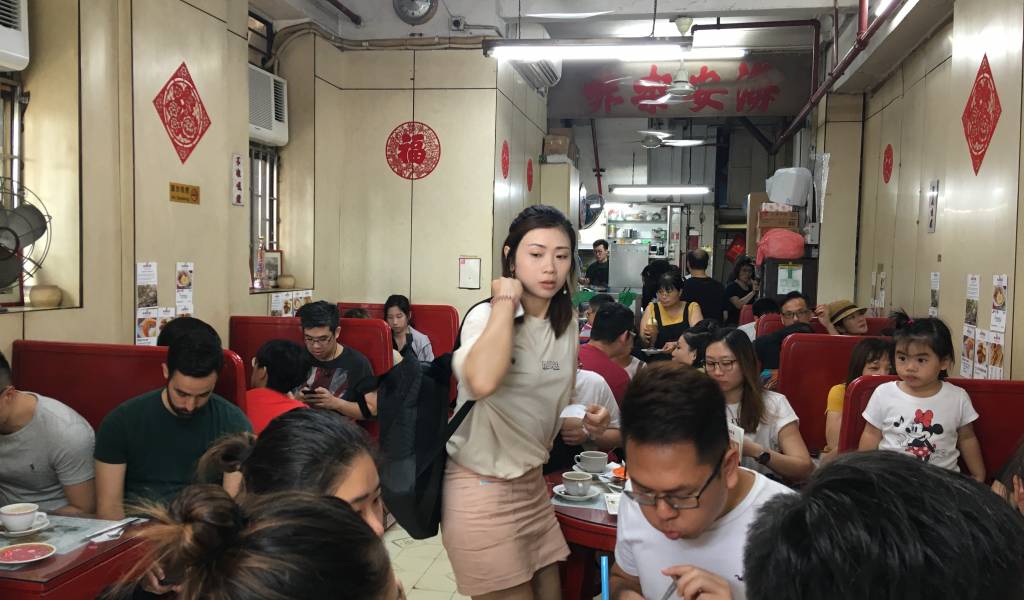 It’s true that dim sum and typhoon shelter crab are some classic Hong Kong must-eats, but if there is one truly iconic Hong Kong food experience, it’s a meal in a cha chaan teng—Hong Kong’s local diners.

What is a cha chaan teng?

Prospering during the 1950s, cha chaan teng (茶餐廳), translated as tea restaurant, served as an affordable alternative to high-end European restaurants for locals and expats to eat.

Established during the British colonial era, the menu is a creative fusion of international dishes with a Hong Kong twist that can make the Europeans—mostly Italians—to gasp and gulp. Char siu (Cantonese barbecued pork) and spaghetti in soup, anyone?

It’s not just efficiency in service that’s expected, it’s often explicitly requested of the customers, too. Some cha chaan teng are so extremely efficient that a meal there is dubbed a light-speed meal.

With a massive menu and a lot of attitude, cha chaan teng can be intimidating for locals and travelers alike. So before stepping foot into a cha chaan teng, here’s a local cheat sheet to help you ease through the process like a pro.

Remember you aren’t here for “service” but a sense of adventure. Present yourself—better with a poker face—and tell them how many people you are. You’ll be assigned a table or you’ll be asked to sit wherever you want. If you want a booth seat, tell them you want a ka wai 卡位.

Cups of tea, gripped between the strong fingers of your server, will arrive with or without fingers slightly submerged in it. The teas are for cleaning—so go ahead and stick your utensils in the cups. If utensils aren’t in plain sight, they’re probably in a built-in drawer in your table.

From this point onwards, you have about 57 seconds to think about what you want.

Step 2: What to order at a cha chaan teng?

One-dish rice usually consists of a variety of sauces, vegetables and meats on rice or noodles in one dish. Some of the best dip tau faan include stir-fry beef with flat rice noodles (gon caau ngau ho 乾炒牛河) and diced pork fillet with rice in corn sauce (suk mai juk lap faan 粟米肉粒飯).

The classic baked pork chop rice is a casserole of egg fried rice, topped with a deep-fried pork chop, diced vegetables, tomato sauce and cheese. Loyal Dining serves one of the best versions in Hong Kong.

The best combo of mixed instant noodles comes with char shiu or chicken wings with grated ginger and spring onion.

A spin-off of pain perdu, plain toast pan-fried with egg mixture, Hong Kong’s French toast is a peanut butter sandwich dipped in egg mixture and then deep-fried. The crispy dish is usually served with maple syrup or condensed milk. Hoi On Cafe Sheung Wan, one of the oldest cha chaan teng in Hong Kong, is one of the best places to try a sai do si.

If you only have time for one drink in Hong Kong, forget the bars–order a milk tea from a cha chaan teng. Hong Kong–style milk tea is an arguably more sophisticated and delicious offspring of the English tea. Every cha chaan teng has its own secret recipe.

Each milk tea is made of a selection of ground tea leaves and evaporated milk. The milk tea will then be “pulled” (poured using a milk tea strainer that looks like a silk stocking), which creates a silky and flavourful cup of milk tea.

Poke the lemon slices before drinking.

Can’t decide between milk tea and coffee? Order a yuenyeung, which is usually one part coffee and two parts milk tea.

An all-time favourite in the summer in Hong Kong, red bean ice is a drink made with sweetened red beans, evaporated milk, a scoop of vanilla ice cream and crushed ice.

Step 3: How to order at a cha chaan teng

For its price, you’ll be amazed by cha chaan teng’s resourcefulness and flexibility.
You can ask for a customised version of almost any dish and drink.

To give you an example, you can order “Gai paa lo ding zyun wu dung jau cheng, ng goi” which means “Chicken cutlet with instant noodles, but replace instant noodles with udon and without onions and coriander, please.”

Most common terms you can use in a cha chaan teng

To double the portion of rice or noodles in a dish, say:
Ga dai 加底, which literally translates as “add base”

To ask for the steamed rice of your dip tau faan to be fried with egg first, say:
Chaau dai 炒底, which literally translates as “fry base”

If you don’t like herbs and coriander in your dish, say:
Jau cheng 走青, which literally translates as “leave greens”

To ask for a hot drink, say: Yit 熱 [add your drink here]

To ask for an iced drink, say: Dung 凍 [add your drink here]

You can also be picky about the amount of ice in your drink. To order drinks without ice or with less ice, say: Jau/siu bing 走/少冰

You can end every sentence with ng goi, or thank you.

Step 4: How to pay at a cha chaan teng

After you order your food, the server will return with your receipt. Mostly handwritten with abbreviations of your dishes or simply just the price of your dishes.

Pay your bill at the cashier counter. Usually, no tips are expected.