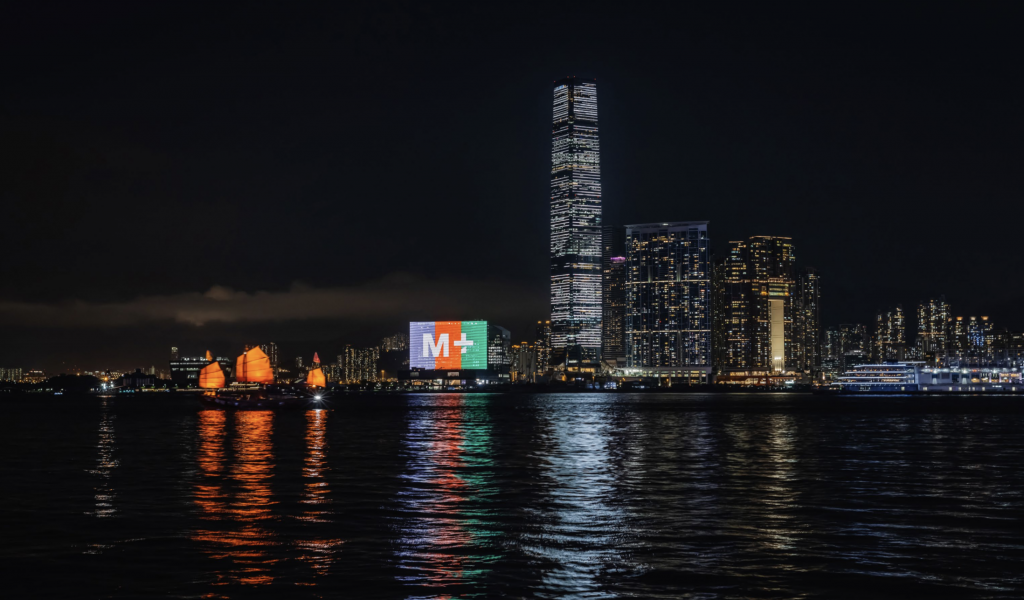 Why Hong Kong's New M+ Museum is a Must

Assuming you’re not an art snob, the new M+ museum in Hong Kong’s West Kowloon district is spectacular, no matter what one’s perspective is. If one is gazing at it from the Hong Kong island side at night, there’s the massive multi-media screen to look at, filled with 5,664 LED tubes, making it one of the world’s largest. Once on the Kowloon side, the 700,000 square foot building looms 16 stories high and includes 33 galleries, three cinemas, three restaurants, a research center, a media library, roof garden, offices and more.

It’s spacious, cavernous, made of reinforced concrete and supported by five massive giant steel trusses for support, a direct reaction to the underground Airport Express railway that runs just beneath it. “Initially an obstacle that complicated planning, this distinctive feature has become the raison d’etre for our project, consisting of a rough large scale exhibition universe that quite literally anchors the entire building to the ground,” says firm Herzog & de Meuron, architects of the project. “By uncovering the tunnel, a spectacular space is created for art and design, installation and performance.”

At a cost of HK$5.9 billion, yes, it’s expensive. And yes, despite being announced in 2012 (and discussed for two decades before that), it’s only just finished. And yes, due to the city’s recently created National Security Law, there are already grumblings about artist censorship.

But a recent visit is ample proof that M+ is a crown jewel in the city’s plans to turn the HK$20 billion West Kowloon Cultural District development into – if not Asia’s leading arts hub – then certainly a viable global tourist attraction.

It also shows more than you would think. 70 curators headed by Doryun Chung have collected 50,000 art pieces from 777 artists across 35 countries. Though Asian art dominates the four permanent galleries, there’s certainly room for an ever changing slate of major exhibitions, films, and performances by Western artists. “By offering an open and welcome platform with creative learning experiences, M+ is dedicated to creating an active culture that connects people, objects and spaces,” says M+ Museum Director Suhanya Raffel. “It is our hope that the museum inspires the city’s residents and international visitors alike.”

That it does, as one visit isn’t enough to grasp all that’s contained within the walls of M+.
But here’s a primer for some of the exhibits to check out, as well as some of the answers to questions that may be lingering in the minds of those who haven’t been able to visit yet.

British artist Antony Gormley started the concept of producing local installations in 1989. For “Asian Field”, he organized 300 villagers in the Xiangshan village of Guangdong to create hand-sized clay figurines that could stand up and have two eyes. Otherwise, how they created their figurines was up to them. He also teamed up with photographer Zhang Hai’er to show a villager with one of their creations in a series of photographs.

Both the portraits and the “Asian Field” are on full display in the West Gallery of M+. This exhibition is often crowded with long lines, but with good reason. The full room lined with endless rows of figurines (200,000 in all) is breathtaking and contemplative. It provokes thoughts of how vast China is, how populous mankind has become, how productive those villagers were and so much more.

A fascinating gem found amidst the vast Sigg collection (owned by Swiss collector Uli Sigg, the museum’s largest donor), this 2007 piece by Chinese artist Cao Fei showcases a digitally constructed Chinese city that’s completely fictional. It explores the concept of how things might be if art, architecture, politics and more were all different within the country, as seen through the once popular video arena “Second Life”. One could spend hours here, exploring different characters as they journey through areas of the city, and indeed, some visitors were doing just that, lost in a fake Chinese world of possibilities.

There are over 500 objects here in the East Gallery – furniture, design, graphic arts and the like – but what really sets this exhibition apart are the models of various buildings and venues in different Asian cities. It’s a fascinating look at the various futuristic visions people have had of the region and how they’ve aimed to thrust their dreams into the 21st century. Each model is worthy of close examination and repeat visits.

Smack dab in the middle of the “Things, Spaces and Interactions” exhibit is the Kiyotomo sushi bar, an oasis of zen and calm in an already peaceful, though crowded, venue. Walk in through the curtain and you’re transported to the Shinbashi district of Tokyo in 1988, where Kuramato Shiro created a minimalist blend of granite, steel, wood, glass, acrylic and colors. The entire interior – acquired by M+ in 2014 – is intact, one of the few that remains of the prolific designer’s work. The only thing missing is a plate of toro sushi and some miso soup.

Set apart in a room resembling a chapel, the video sculpture showcases unsettling texts accompanied by layered music that’s ever changing. South Korean artist Young-Hae Chang and American artist Marc Voge, known as Heavy Industries, created the exhibit to show the vastness of human experience, how unsettling power can be and how crazy everyday life is. The 17 minute installation offers both an opportunity to chill out within the museum and simply contemplate one’s existence.

Neon signs have long been an integral part of the sights and spirit of Hong Kong. Nearly every 20th century film that has attempted to capture the city has showcased these large, bright art-deco advertisements which featured prominently in such areas as Tsim Sha Tsui and Wan Chai. But they’re rapidly disappearing in the name of “progress”. Since 2013, M+ has been acquiring signs as a recognition of their uniqueness in a bid to preserve them. An online platform highlights their historical aspect. An exhibit opposite the entrance to M+ showcases how impressive they are visually. The exhibit serves a few purposes, as it allows members of the public to see one area of the museum’s storage space in its raw form. It also enables visitors to see how large “Sammy the Cow” (once a neon advertisement for Sammy’s Restaurant in Sai Ying Pun is up close and how important Hong Kong’s signs are as a collective memory.

As vast as M+ is, only 1,500 of the 50,000 pieces acquired are on show, which means repeat visits are a must. And everywhere one looks there’s a new find. In the Courtyard Gallery lies a white chess set created by Yoko Ono. In the three cinemas there’s an ever changing selection of art based films to be screened. Outdoors, the Grand Stairs seem to march on endlessly, and appear destined to also be one of the venue’s premiere hangout spots. An ever changing array of performances and exhibitions also ensure that every visit seems new. On one recent weekend, Silent Museum featured an interactive performance about the museum as created by a group of deaf performers.

And given the city’s recently enacted National Security Law, there’s still plenty of controversial art on display. Two exhibits by Ai Weiwei have passed muster, including a photograph of his prominent middle finger held high. On wall plaques and in satirical art pieces, there are several references to the 1989 events in Tiananmen Square. Also, everywhere one looks there are photos, paintings and exhibits that show the good, the bad and the ugly taking place in China today.

For the museum’s first year, all visitors can enjoy free admission to M+. But, online reservations are required due to crowds and can be made here.

In these days of COVID, the LeaveHomeSafe app is also required.

Becoming an M+ member also has its benefits. Those who do so, are allowed access to the M+ Lounge on the 11th floor, where one can relax and even eat food. Annual membership costs HK$600 for adults, $300 for students and $1,200 for families. Applications can be made here.

M+ is open on Tuesday – Thursday and weekends from 10am-6pm.
On Fridays, opening hours are from 10am-10pm.
The museum is closed on Mondays, and on some public holidays.

Though walking to M+ is still a trek, it’s a five minute walk from the MTR at Kowloon Station exit E4 or 5. Other arrangements via car, bus or even water taxi, can be found here.