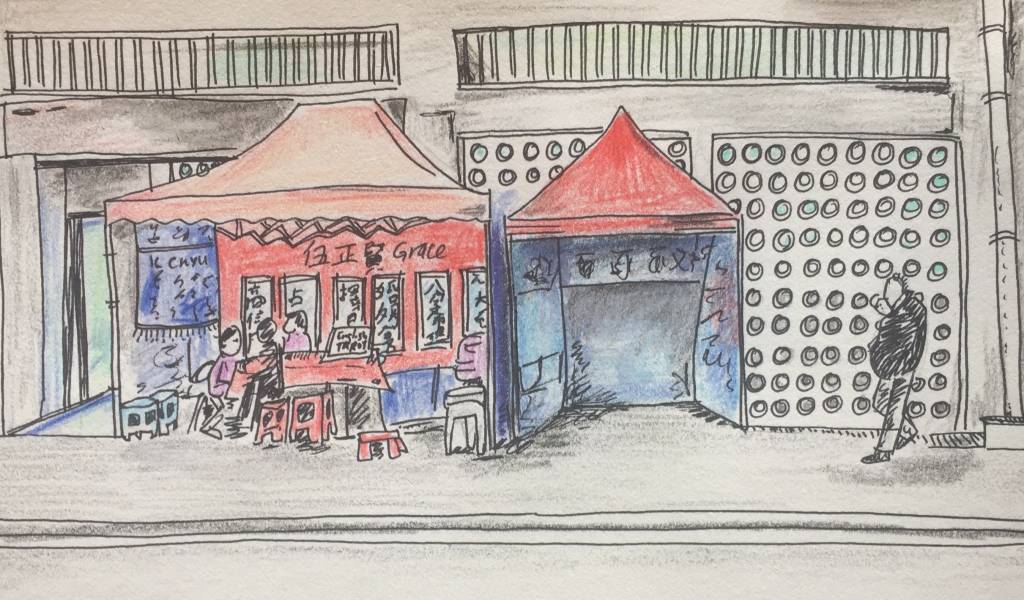 My Time with a Temple Street Fortune Teller

For a place so modern, Hong Kong is steeped in tradition and superstition. Altars to the god Kwan Kung laden with colourful fruit and burning incense offerings are found tucked away everywhere from storefronts to the deep, deep bowels of the local subway system—the MTR. Lucky number 8 phone numbers and license plates fetch higher prices, and buildings often skip the 4th and 14th floors. We take superstition so seriously that the city has a feng shui budget and local government officials head to temple to shake loose sticks from a cup to predict what lies ahead for the city in the new year.

Enter Temple Street a heady curtain of smells, sights and sounds. Brightly lit stalls selling silk scarves, bags, electronics, sex toys, and Hong Kong–themed knick-knacks for tourists looking to buy something for the folks back home, and where the sound of street-side karaoke and the scent of spicy crab, curries and fried garlic linger in the air. It’s a street that speaks of life and longing—seems an appropriate place where someone might go to find out about their future.

This is where Megan and I found ourselves one humid June evening. Sat perched on tiny plastic stools, among a bevy of fortune tellers who have been offering their services in the neighbourhood for years with the shadow of the nearby Tin Hau Temple looming behind us. Signs for palm, face, tarot, crystal ball and Chinese astrology readings line small, surprisingly mundane stalls that look like they could equally be used to solicit donations for the SPCA.

Megan’s never been to a fortune teller before. I have, as a lark with my mother wandering around Seoul’s Insadong, back when I was a college student. The guy told me that I’d make my living with words, and that I’d either get married very young, or much later, not anytime in between. He was right about the words, and possibly right about the getting married later (we’ll see). Oh and he said I’d have a long and happy life. Same with the rest of my family.

I must have a certain happy-go-lucky look about me, because that’s what this fortune teller told me as well. This lady with the broad, open and friendly face but shrewd gaze, so ordinary in her simple black top and loose-fit black trousers that you wouldn’t give her a second glance anywhere else.

She’s charged us HK$80.00 a piece, and knows we’re not particularly serious since we’ve no burning questions about our futures. She seems to read her audience well (two fairly skeptical, but generally optimistic journalists), there’s no mystic mumbo jumbo, no pomp and circumstance as she asks for our birth dates and takes our palms into her hands to read the lines, mine an M that looks to be made of two intersecting upside down Vs.

Her reading? My stars show that I’m very loved. Many men love me, and so do my parents and grandparents. I swear it must be all the smiling, and the flowery dress and equally flowery bag ensemble, and the fact I’ve put on some makeup and my hair is down for a change. I’m not normally this girly. Makes me wonder what would happen should I come dressed shabbily and looking morose.

She’s divined from the stars that I should have four siblings, less if my parents used contraception. That one lives overseas, and that I may one day end up working overseas as well. And that my career is on track. She also read that I may have a bit of a temper lurking underneath, despite my generally cheery disposition.

I’m on track to get married in the next year. And that I should never marry someone older than me. In fact she tells me I need a younger man that I can control, and then we’d both be happy. This makes me laugh out loud. And she looks annoyed.

“No, this is serious!” she insists. “You cannot trust the older men.”

She warns me that I need to watch my health. The white spots on my palm say I need to eat less fatty food and go to bed earlier. They show my liver is having to work too hard, and that I should drink more hot lemon water. And apparently the break on the life line on my palm shows there will be a time later in my life where I will save my own life.

I squint trying to see the white spots she’s talking about, and I’m still not sure I can see them.

It’s Megan’s turn after, and she gets the full career, love, health rundown as well. She gets told that she also shouldn’t trust older men, that if she gets married after 35 her marriage will be successful, that she will do well if she starts her own business and that there was once an older man in her life that she rightly gave the boot to, because he didn’t know what he wanted, and she was the kind of woman who wouldn’t stand for that sort of thing.

We walk away trying to keep a straight face, not giving away which of the things she said were true, but buzzing with excitement about how much of us she’d gotten correct. We were both curious about how we would come across. What about us outwardly would manifest the internal as well. It was actually a lot more than we’d thought.

For me, she was wrong about the details of my family, I do not have that many siblings. My parents certainly do love me, and I’m sure the grandparents did too when they were alive. I do have a lot of male friends so I guess I am loved by many men.

I laughed particularly hard at her comment about needing to marry a younger man I could control because I’m a firm believer in free will and it being important that people have agency in their lives. I also would never marry anyone just a year after meeting them, I’m far too cautious a person. And then my friends jokingly mentioned pregnancy and a shotgun wedding. Thanks guys…

There was a lot to be skeptical about. I rolled my eyes a little at the comments about my health. Any young professional in Hong Kong pretty much does not get enough sleep, and probably eats like crap sometimes.

But thinking about it, she’s read me and my place in the world better than I thought. The little I was giving away about who I was to her was evidence of perhaps a need to be in control, and I had never thought of myself as a control freak, quite the opposite actually. And she wasn’t wrong that I actually do tend to get along with men younger than myself, and yes, my career and family life are all perfectly fine.

It’s an interesting thing to be dissected by strangers. So perhaps while her predictions of my future are probably not likely to be too accurate, she was painting a portrait of me as I was now. The socio-economic class I belonged to, and therefore my access to resources and mobility, and stable connections who have been afforded the same. It made me think a lot deeper and harder about my lot in life, and I walked away feeling lighter and happier. It’s good to be reminded of what you have, in a place like Hong Kong that has you striving for more and thinking about what you do not have or the things that you need to achieve. I think it’s not just Hong Kong, but modern city life that makes us this way.

There was a certain hopefulness being told that you have a good life ahead of you and being reminded to look after yourself in the small ways. I’d been feeling a little bit down after having a relationship unravel not to long before this reading, so hearing about my future young husband put a little spring in my step, and my plans to go on a whirlwind world tour suddenly had an extra-rosy tint about it.

It was also a wonderful way to get to know Megan and share our own stories that we’d normally perhaps not talk about. Fortune favoured the friends.

“Yes, agreed! Good bonding,” Megan wrote over Whatsapp a few months on. “I personally don’t typically think about that kind of stuff too much, so it was a little jarring to have a complete stranger talk to me about it,” she said.

“How much of it is also kinda listening to the bits that validate what you know or think.”

Cost: HK$80.00/person (Can be more depending on the qualifications of the fortune teller. The better the rep, the more costly)
Time: 15–20 minutes roughly (If you have specific questions the session might go for longer, also depends on how many other customers are waiting around)
Things you’ll likely need to provide: Your birthday (So they can tell you what the alignment of the heavens at that time have planned for you).
Common types of readings: Face, palm, tarot, Chinese astrology