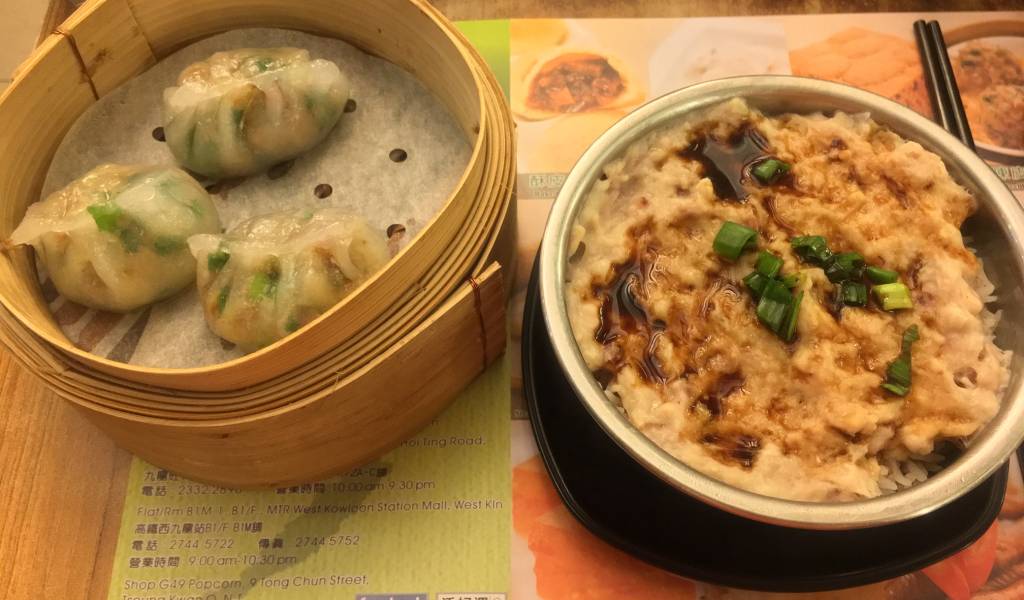 Tim Ho Wan: Not All Dim Sum Are Created Equal

Across Tim Ho Wan’s six locations in Hong Kong, the menus are almost similar to one another, with only slight variation. Shops offer 35 dim sum options categorised by: steamed, deep-fried, rice, congee & snacks, rice noodle rolls and desserts. Popular classics—including the shrimp dumplings (har gow) and the chain’s pièce de résistance barbecue pork buns (char siu bao)—are on every menu, while some dishes are only offered at a particular branch. Prices differ for every location, and an average cost per meal per person is around HK$80.00.

The chain’s success goes back to 2009 when the two aforementioned chefs opened the first branch in Mongkok, a bustling district in Kowloon. From the outside, it looked like any nondescript dim sum eatery. And inside, it only had 20 seats. Although the place was cramped, it served quality dim sum for just a fraction of the price.

A year after it opened, the hole-in-the-wall eatery was awarded a coveted one-star Michelin rating. Since then, Tim Ho Wan has gained an almost cult-like following. As queues went insane, the original location moved to a now bigger spot in Sham Shui Po, also in Kowloon.

Today, queues at Tim Ho Wan are much shorter. But with the chain’s presence in six areas across the city, does it still maintain the food quality and level of service? To find out, we revisited each location to see if it still lives up to the hype.

This Kowloon location is roomier than its original branch with more than 100 seats spread across two floors. Weeknights tend to be less busy. As we entered on a Wednesday evening, we were immediately ushered to a seat at the back, served a cup of pu’er tea (HK$3.00 cover charge) and handed a paper menu.

We ordered steamed rice with pork patty and dry cuttlefish (HK$24.00), a common traditional comfort food that needs a dash of soy sauce to elevate the flavour. There was nothing exceptional about the dish, however, the succulent beef meatballs (HK$18.00, 3 pieces), infused with dried mandarin and spring onions, were delightful. We also liked the steamed dumplings in Chiu Chow style (HK$16.00, 3 pieces), in which morsels of dried shrimp, Chinese sausage, chives and crispy water chestnuts are wrapped in a delicate, translucent skin.

What makes this branch more sought-after than other dim sum restaurants in the area is that it serves barbecue pork buns (HK$21.00, 3 pieces). They are usually steamed, but here and at other branches they are oven baked to perfection. The pillowy buns are covered with another layer of puff pastry to add that extra sweetness. Inside you’ll find a decadent mixture of pork seasoned with oyster sauce, sugar and soy sauce. Dishes at this branch are sometimes hit or miss, but we enjoyed most steamed items: shrimp dumplings (HK$28.00), spareribs with black bean sauce (HK$18.00), and glutinous rice dumplings wrapped in lotus leaf (HK$29.00). The only downside is that this restaurant tends to get very busy during peak hours so service is not as attentive as the Central or Tseung Kwan O branches.

The Central and West Kowloon locations, strategically located inside a train/railway station. The Central branch is the kind of spot where you’d go for a quick lunch, dinner or afternoon tea break (quick being the operative word). To avoid the crowd, we visited at 2 pm and got the savoury turnip cakes (HK$20.00, 3 pieces), which were lightly pan-fried. The deep-fried spring rolls with shrimp and vegetables (HK$34.00) were crunchy at every bite.

The West Kowloon branch, on the other hand, is more welcoming. With a modern interior, tiled floors and cushion seats, making our dining experience more comfortable. The crowd here is mostly mainland Chinese and you’ll find diners slurping up a steamy bowl of congee with pork and preserved egg (HK$25.00) and munching on steamed rice noodle rolls stuffed with BBQ pork (HK$26.00). Both are great carb treats.

The Tseung Kwan O branch, opened in 2013, mostly caters to residents living around Sai Kung. Its menu is slightly different from other branches as it offers two nourishing soups that alternate weekly. We weren’t able to try one of them, but instead, we opted for dishes that are not served at other locations: steamed spinach dumplings with shrimp (HK$24.00, 3 pieces) and pan-fried green peppers with diced fish and pork (HK$19.00, 3 pieces).

We enjoyed the dumplings with gusto, but we were surprised to see how oily the green peppers were. To compensate, we logically treated ourselves to barbecue pork buns (HK$22.00, 3 pieces)—and the taste seemed consistent with what we had at the North Point branch. The ambiance is also well thought of: more space is given to diners and the atmosphere is not as loud as locations in Kowloon. The staff can be chatty and engaging, especially when you show your curiosity about the chain’s decade-long history.

Tim Ho Wan’s location in the Olympian City 2 mall at Tai Kok Tsui, west of Mongkok in Kowloon, is worth a visit only if you’re in the area. Designed with white-washed panels and arched interior walls, this casual restaurant, opened for seven years now, offers everyday shoppers a nice respite. Beware though, the noise level can go up during peak hours in which you may cringe at the cacophony of sounds, but otherwise it’s where you can quench your thirst with unlimited refills of tea and satiate your hunger with steaming baskets of dim sum. Bestsellers include meaty pork dumplings (HK$30.00, 4 pieces), silky rice noodle rolls (from HK$24.00 and up) and glazed custard buns (HK$22.00, 3 pieces). End your meal with osmanthus flower jelly with Goji berries (HK$12.00, 3 pieces)—they are divine!

If you don’t know your char siu bao from your har gow, check out our dim sum guide + etiquette tips for beginners!