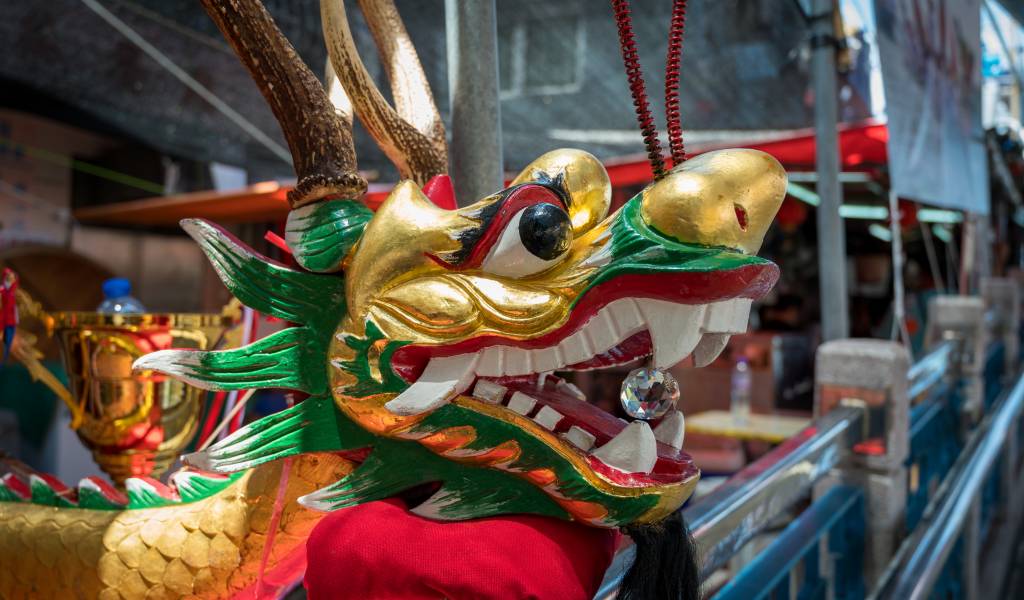 Pic: iStock.com/sharrocks
Sharing
We are yet to confirm the dates and details of this event.

The remote village of Tai O, in the deep south of Lantau Island, hosts one of Hong Kong’s most special dragon boat events.

Tai O is a very unique place in Hong Kong. This small village at the end of the road was at one point not even accessible by road, making it its own little microcosm. The fishing culture here is still strong, with stilt houses built out into the shallow waters, a vibrant seafood market, and pink shrimp paste drying in bamboo baskets under the sun.

During the parade, the residents of the stilt houses and those built along the waterfront sprinkle the water with auspicious ‘joss paper’ and give other offerings to the deities as they pass by. The goal of this is to ask for blessings from the deities and placate wandering water ghosts and evil spirits.

After the parade, the deities are placed in a temporary ceremonial shed, to keep them safe for the rest of the day.

So where did this special ritual come from, and why? Legend has it that once upon a time, a dangerous plague spread through Tai O, claiming many lives. The local residents came up with the idea to ‘invite’ the gods to their town by parading their statues on the dragon boats, and thus driving out the evil spirits causing the plague.

But, we haven’t forgotten about the dragon boat races themselves. After the parade of the deities through the village’s waters, the three dragon boats then hold a friendly race. Only after this is complete will the other dragon boat teams hold their competition, with the typical fanfare, drumming, and excitement that usually accompanies dragon boat races. Residents and visitors alike line the waterways of Tai O to see the action take place.

When all the races are done, and the day is drawing to a close, the deities will be put back on the sacred sampans, and the three designated dragon boats will tow them back to their respective temples. Following this, the fishermen’s associations have a feast to celebrate another successful year (and, of course, no plague).

As the water parade is a feature unique to Tai O that you cannot witness anywhere else, it has been recognised as part of Hong Kong’s Intangible Cultural Heritage.

Tai O makes a fascinating day trip, and can be easily combined with other attractions on Lantau Island, such as visiting the Tian Tan ‘Big Buddha’ and the Ngong Ping 360 Cable Car.

How to get there:

Tai O is not all that easy to get to, and can only be reached by New Lantau Bus, or by blue taxis, which only operate on Lantau Island. You cannot take a red or green taxi from Hong Kong Island or Kowloon to get there, as they are not allowed on the restricted South Lantau Road.

Here are the three bus routes that connect you to Tai O:

A word of warning that the buses tend to fill up fast (since they are the only ride around!) and people often get stranded at bus stops waiting for the next bus to come with some available seats.

A good way to avoid this frustration is to spend the night in Tai O! Read our Tai O Area Guide to find some ideas about where to stay, from the regal Tai O Heritage Hotel to quaint guesthouses and hostels.

To prevent the spread of COVID-19, many events have been canceled. Always check official sites before heading to an event.
Open with Maps
Jun
大澳端午龙舟游涌
Tai O Fishing Village
Free
Lantau Island
Typical weather at this time:
High: 31 ºC Low: 27 ºC
Powered by Dark Sky
Related Events
More Events
We do our best to make sure event info is correct. However, all event details are subject to change.