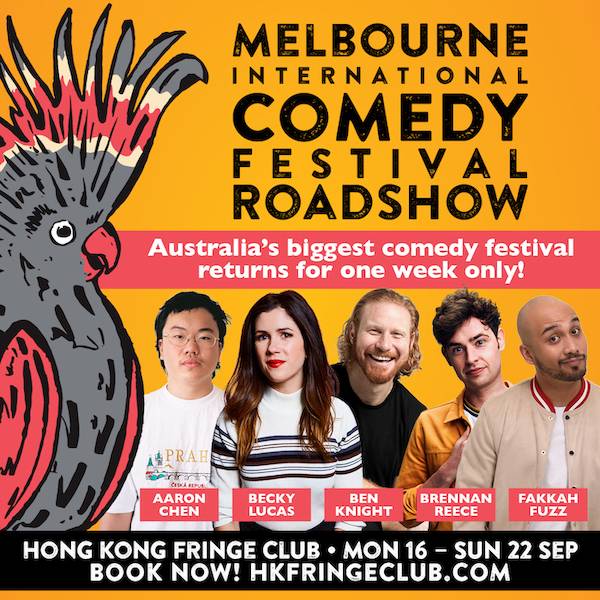 Gear up for a week of side-splitting entertainment this September with the return of the Melbourne Comedy Festival Roadshow, as it makes it stop in Hong Kong during its Asia tour.

With a dynamic group of comedians handpicked both from Australia and beyond, this is a fabulous opportunity to see the rising stars from Australia’s biggest comedy festival.

The roadshow is being held at the Fringe Club in Central from September 16 to 22, and with early-bird tickets already sold out it’s recommended to buy yours soon.

Becky Lucas is a rising star having made a name for herself as a writer and performer. Becky was selected for the Melbourne International Comedy Festival’s “The Comedy Zone” showcase, and she has also worked on Emmy-nominated TV show Please Like Me.

Ben Knight left his days of teaching behind to pursue his full-time dream of being a comedian, and is known for combining humour and song on stage. He’s become a popular face on Australian TV, having appeared in both series and movies.

The UK’s award-winning Brennan Reece is also with the troupe, having won the “English Comedian of the Year” title in 2015, and a nomination for “Best Newcomer” award at the Edinburgh Comedy Awards in 2016.

Fakkah Fuzz joins the roadshow this year as a rising star on Singapore’s comedy scene. This award-winning comedian has headlined Comedy Club Asia and made waves as the first Singaporean to have his own special on Netflix with his stand up show Almost Banned.

Tickets range from HK$250.00 for Fringe Club members to HK$420.00 for standard entry and are available through Ticketflap.