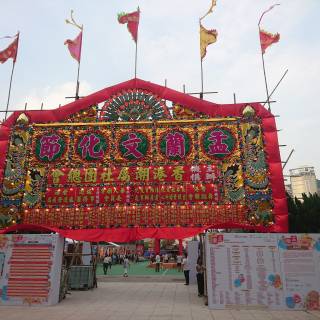 The Hungry Ghost Festival comes from the ancient Chinese belief that during the seventh month of the lunar calendar—known as the Ghost Month—both the spirits of your ancestors, as well as other restless spirits, return to roam the earth.

To appease these wandering souls, and pay respect to family members who have passed away, the Hungry Ghost Festival is held on the 15th day of the month. This traditional form of ancestor worship is very strong in Hong Kong, and has been recognised as part of China’s cultural heritage.

In this fascinating tradition, people leave out offerings of food for the hungry ghosts, and light incense and candles to help them find their way back to the afterlife. You’ll also see people on sidewalks, doorways and alleys burning joss paper and fake money from the Bank of Hell, typically in a metal container.

Other interesting paper offerings are effigies of things that the spirits may need or enjoy in the afterlife, such as clothing, food, their favorite pack of cigarettes, and even luxury items such as sports cars and mansions, to make the afterlife more comfortable.

Visitors can observe festival offerings and traditional rituals, watch a blessing ceremony, explore the exhibits, and sample traditional vegetarian food made at this time of year. There are also live performances such as Cantonese Opera and folk dances.

15th Aug, 2020
Victoria Park
Free
Causeway Bay
Typical weather at this time
High: 31 ℃ Low: 27 ℃
Powered by Dark Sky
Related Events
More Events
We do our best to make sure event info is correct. However, all event details are subject to change.