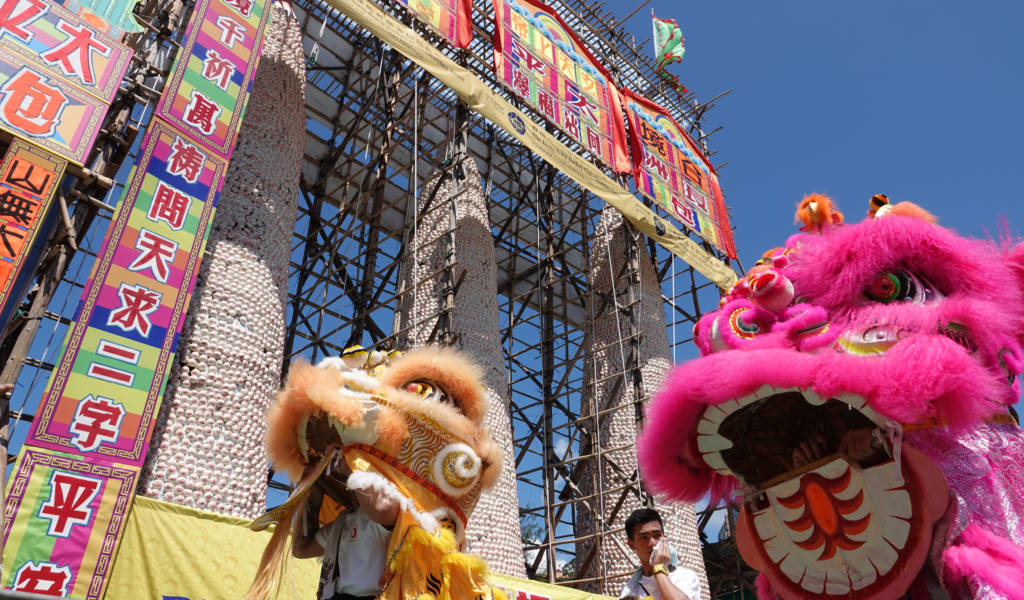 The sleepy island of Cheung Chau is known for three things: pirates, windsurfing, and the Bun Festival. But it’s the Bun Festival that keeps visitors coming back, year after year, to see what is no doubt Hong Kong’s most unique and quirky event.

One legend has it that about a century ago Cheung Chau suffered a devastating plague. The villagers prayed at Pak Tai Temple, and carried statues of deities through the streets to scare away the evil spirits. After this the plague ended, and a new annual ritual was born.

The festival actually lasts for four days, with the climax on the third day. Everyone lines the streets to watch lion and dragon dances, drumming, and the colourful ‘floating parade’. Local children in traditional costumes are hoisted in the air on poles and paraded through the streets–—just as the villagers did with the statues, more than 100 years ago.

Thousands of buns are baked on island, and stamped with the Chinese character for ‘peace’. The iconic white buns are on sale everywhere, and you can choose from fillings such as sesame, lotus, or red bean paste. (Spoiler alert: the ones on the bun towers are plastic!)

At midnight the famous ‘bun scrambling’ event takes place in front of the Pak Tai Temple, the oldest and most important temple on the island. It’s an incredible spectacle as well-trained competitors race to scramble up a 20 metre tower covered with buns, collecting as many of them as they can in three minutes.

Getting to the Bun Festival

To get to Cheung Chau, you’ll need to line up early to get a ferry ticket from Central Pier #5, because on festival day the ferries fill up quickly and lines are very, very long. Often people are turned away as the boat reaches capacity.

This is therefore a great opportunity to spend a night on the island, so check out our guide to Cheung Chau to read about what kind of accommodation is available.

Organisers may cancel events, alter schedules, or change admission requirements without notice. Always check official sites before heading to an event.
Open with Maps
17th May–20th May, 2023
11:00am – 1:00am
Yuk Hui Temple (Pak Tai Temple)
Free
Festival
Cheung Chau
Typical weather at this time:
High: 30 ºC Low: 28 ºC
Related Events
More Events
We do our best to make sure event info is correct. However, all event details are subject to change.