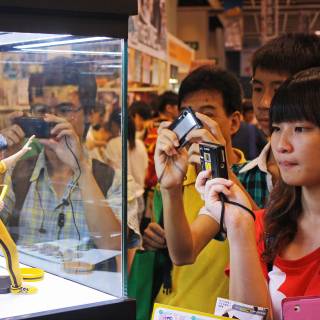 Hong Kong’s very own Ani-Com and Games convention has been around for more than two decades, and is the largest gathering of anime fans and gamers in town.

Taking place at the Hong Kong Convention and Exhibition Center in Wan Chai, Ani-Com is a five-day event that draws in fans of animation, comics, video games, rare and limited edition collectibles, and music.

One of the most popular features of the Carnival is the E-sports carnival, which shows off the hottest video games and gaming devices, and gives gamers a chance to try them out.

If you love Cosplay, be sure to check out the event’s awesome Cosplay Contest, which has a grand prize of HK$8,000.00 for the best costume.

This year’s music festival is being headlined by J-pop stars 26 Masquerade, Ena Fujita, angela, and more.

Local fans have a chance this year to display their own amazing artwork at the anime design competition.

https://www.ani-com.hk/201...
Wan Chai
Typical weather at this time
High: 31 ℃ Low: 27 ℃
Powered by Dark Sky
Related Events
More Events
We do our best to make sure event info is correct. However, all event details are subject to change.